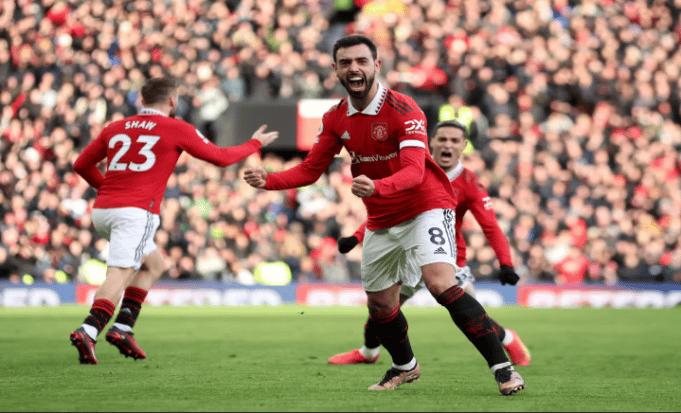 Bruno Fernandes of Manchester United claims that the players play more like a team than as individual to secure a controversial victory against Man City on Saturday, 14th of January 2023.

Bruno Fernandes declared that Manchester United is a team in every meaning of the term after the Reds pulled off an incredible comeback to defeat Manchester City 2-1 at Old Trafford.

For the winning goal, Marcus Rashford kept up his strong play, becoming the first United player since Ruud van Nistelrooy to score in seven straight games.

In Fernandes’ opinion, Man United’s current standing is unimportant, and he wants the club to prioritize hard work and focus to finish the season strongly rather than getting ahead of itself.

“I told the players, ‘We look like a team now,’ before the game. A while back, you could tell that we occasionally worked as a team and occasionally each of us was searching for ourselves. Now you see a real team that sacrifices for one another and reaps the rewards,” remarked Bruno.

Following a heart-in-mouth moment for the home crowd, Fernandes scored the equalizer. Casemiro’s through ball found Rashford, who was offside, while City’s defenders were still wide awake.

However, he (Rashford) refrained from touching the ball as Fernandes grabbed hold of it, finishing instead with a curling shot that gave Ederson no chance. Rashford wasn’t meddling, thanks in part to the normal VAR check, and Man United went on to win the match after that.

When Rashford scored United’s second goal four minutes later to complete a 2-1 comeback victory and move the Red Devils into third place, one point behind City, things only got worse for the Citizens.

After Jack Grealish scored the game’s first goal around the hour mark, United rallied to win the game within the final 30 minutes of play.

Before Marcus Rashford scored for the eighth straight time at home to secure another three-point victory, Fernandes controversially tied the game for the Reds.

The victory moved United up to third just one point behind Man City in the Premier League standings, However, if Newcastle United defeats Fulham at St. James’ Park on Sunday, they would drop back to fourth place in the standings due to the Magpies’ superior goal difference.

With the significance of the Reds’ trip to Selhurst Park in mind, Fernandes has advised his teammates to maintain their composure after Man United defeated their cross-city rivals on their turf for the first time in over three years.

United closes the gap on City, who are now in second position and might drop to eighth if Arsenal defeats Tottenham Hotspur in the north London derby on Sunday.