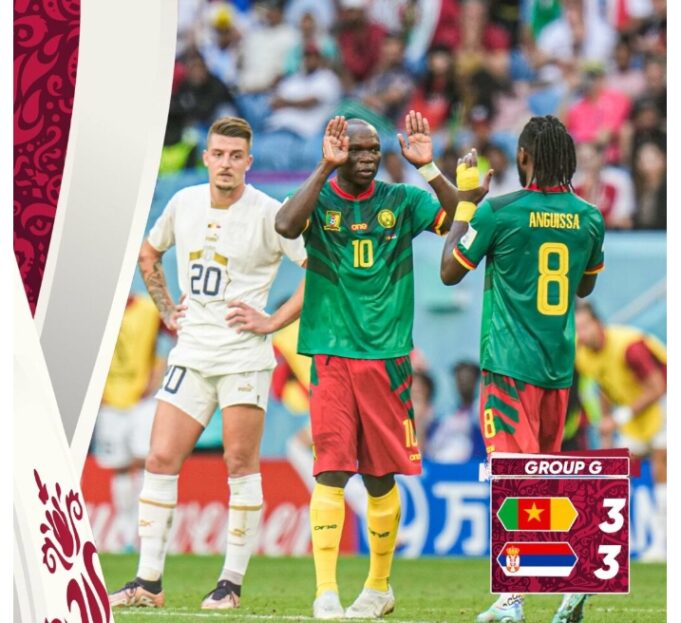 Cameroon held the Serbians to a thrilling 3-3 draw to retain hopes of qualifying for round 16 of the 2022 World Cup.

This was the second time both teams had met, having face each other in a seven-goal thriller in 2010. Serbia won 4-3, but it was a friendly match.

Serbia have not won their FIFA World Cup games against any African team and has lost against the likes of Ivory Coast and Ghana. A win for the Serbs against Cameroon would have been their first in a FIFA competition.

Both sides were without a point going into the game, as they lost their respective opening matches.

Serbia dominated the game as the first half began, with Cameroon retreating into their half to defend against the high-pressing Serbs.

Despite domainating the game, the Serbian defence looked vulnerable on Cameroonian counterattacks.

It was not long before they conceded against the Indomitable Lions. From a corner kick in the 29th minute, Castelletto scored from close range from Tolo’s cross to give Cameroon the lead.

Serbia sped up their attempt to equalise the game, but kept hanging in the Cameroonian half without breakthrough until the stoppage time of the first half.

It was Pavlovic with the goal in the 45+1 minute. He found an equalizer for the Serbs after a header from a freekick.

Surprisingly, the Europeans took the lead in the 3rd minute of the first half. Milinkovic Savic had whipped the ball into the bottom corner from outside the box to give Serbia a deserved lead.

The first half ended with Serbia coming from behind to take a surprise lead with two quick goals in first-half stoppage time.

Cameroon gave little or no sign of coming back into the game as the second half began, despite trailing the Serbs 2-1.

Serbia continued to hold sway over possession and were looking set to double the lead with clear chances.

In the 53rd minute, they finally got another goal from Fulham prolific forward Mitrovic. The Premier League star fired home from close range to make it 3-1 for Serbia.

Cameroon appeared more disoriented than organized after the third goal but could still threaten with counterattacks when having the ball.

Ten minutes after Mitrovic’s strike, Cameroon made it 3-2 with a goal from Aboubakar in the 63rd minute. Aboubakar picked up Castelletto’s long ball and chips it over the Serbian goalkeeper to score Cameroon’s second.

Just three minutes after, Cameroon were back leveled, with a goal from Bayern Munich star Choupo-Moting. Choupo-Moting scored from Aboubakar’s assist to make it a 3-3 draw for the Indomitable Lions.

Serbia still dominated play but could not break the tie, as the game ended in a thrilling 3-3 draw.