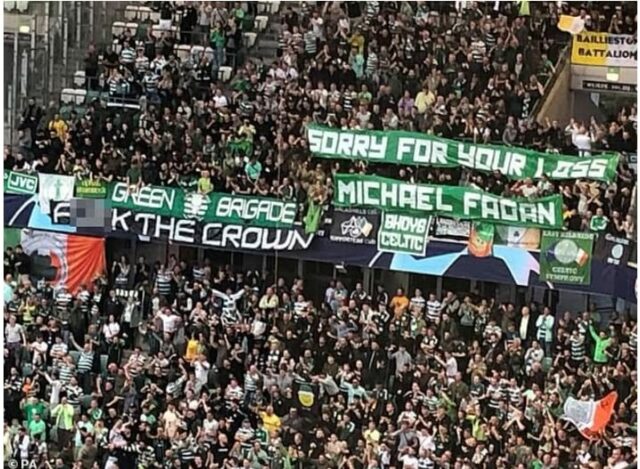 The exhibition of offensive banners about the Royal Family by Celtic supporters has resulted in Uefa disciplinary action, while, Rangers will not be penalized for singing the national anthem at Ibrox.

Following Celtic’s Champions League draw against Shakhtar Donetsk on Wednesday, the organization that governs European football has begun an investigation and “will rule on the subject in due course.”

In remembrance of Queen Elizabeth II’s passing last week, Rangers sang “God Save the King” and had a moment of silence before their match against Napoli at Ibrox.

The Ibrox club, as well as supposedly Chelsea and Manchester City, asked Uefa for permission to do this, but they were denied because they want a “standard pre-match ceremonial without any celebration antics across all UK sites.”

After a moment of mourning, the Ibrox crowd broke into song as the music started playing because a tifo honoring the Queen had been displayed and filled one end of the stadium.

Before Celtic’s match against Shakhtar in Warsaw, there was no time for introspection.

Before the game, Uefa stated that teams might request silence, but no such request was made. Instead, Celtic chose to wear black armbands, just like Rangers.

Before the game began, it was permitted for the Ukrainian hosts, who were competing on neutral ground, to show anti-war messages on screens.

According to UEFA, its decision to deny British teams the opportunity of reciting the national anthem before a game was made “based on maintaining a similar pre-match ceremonial with a somber tone and without any celebratory actions throughout all UK locations to show respect.”

However, Rangers decided to entirely violate the UEFA regulation as the Public Announcer announced that the British national song will play after the pause.

In honor of the Queen, thousands of Rangers supporters arrived bearing banners, and Union Jack flags were flown across the stadium in preparation for the Rangers’ Champions League return.

Meanwhile, the supporters of Red Bull Salzburg paid their respects by making a silent procession to Stamford Bridge ahead of their game against Chelsea on Wednesday.

Fans can be seen silently making their way to the stadium in a video uploaded from the Austrian team’s Twitter account.

“Our supporters made the silent journey from Earl’s Court to the stadium out of respect for the monarch”, the club’s stadium said.

In contrast, during their Champions League match on Wednesday against Shakhtar Donetsk, Celtic supporters unfurled a derogatory banner that read, “f*** the crown.”

After focusing on an inappropriate poster regarding the Queen’s passing on Wednesday, BT Sport was forced to issue an apology.