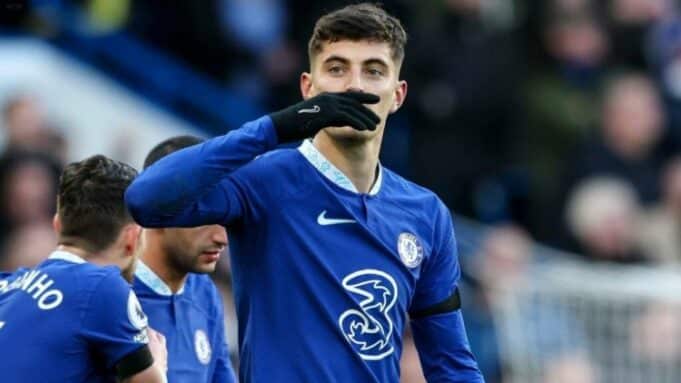 Chelsea vs. Crystal Palace: Kai Havertz scored the only goal of the game from Hakim Ziyech’s beautiful corner to give Chelsea their first win in 2023.

It was a nice atmosphere at Stamford Bridge as Chelsea players wore Gianluca Vialli’s No. 9 to pay tribute to the deceased former Chelsea striker. The home supporters, who have seen their team play horribly, didn’t stop cheering up the team.

The Chelsea fans became louder after the club announced the signing of Ukrainian winger Mykhailo Mudryk from Shakthar Donetsk for £100 million.

The second half was a little bit better, with Havertz scoring a sweet header from Ziyech’s corner kick. It was Havertz’s second goal in 10 games for the club.

His subsequent attempt from a Mason Mount cross was even less successful due to both his positioning in front of a wide-open goal and the missed opportunity to win the game.

Although before the end of the match, Crystal Palace failed to create chances and couldn’t get past Kepa, who has been in impressive form this season.

Chelsea now has 28 points from 18 matches. The London side currently sit in the 10th position, beneath Liverpool. Chelsea are ten points away from the Champions League spot.

Who won the man of the match in Chelsea vs. Crystal Palace?

Kepa Arrizabalaga received the highest rating in the match; Chelsea wouldn’t have won their match if Kepa didn’t pull some excellent saves. The Spanish goalkeeper seems to be a force to be reckoned with.

Since the sacking of Thomas Tuchel, the goalkeeper has been at his best. He saved Chelsea from losing against Manchester United and Brentford in the Premier League.

Edouard Mendy’s signing made him the second choice, but now he has secured his place as Chelsea’s number one. If Chelsea were to qualify for any European competition, Kepa should be the reason for it.

What’s next for Chelsea and Crystal Palace?

Chelsea faces another difficult task when they travel to Anfield to play against a disorganized Liverpool side on January 21, 2023. Both teams are looking forward to winning the match.

Crystal Palace, who currently sit in the 12th position on the Premier League table, face the in form Manchester United on January 18, 2023. It is a difficult match to play against the Red Devils.

However Patrick Vieria side have always proven difficult for Manchester United to beat.