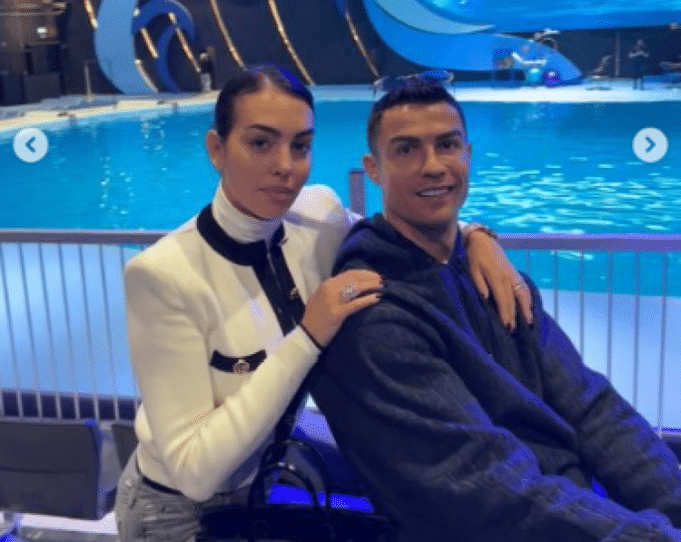 Cristiano Ronaldo and Georgina Rodriguez went out with their kids and they all had a lovely quality time which the footballer shared on his Instagram page.

Ronaldo is getting accustomed to his new base as he prepares to play for Al-Nassr FC, a Saudi Arabian football club.

The Portuguese footballer shared images to Instagram on Monday showcasing his family—partner Georgina Rodriguez and their four children—sightseeing in Riyadh, the capital of Saudi Arabia.

Ronaldo captioned the images, which showed an outdoor city backdrop and a trip to an aquarium-like building, “Quality time with my loves.”

Rodriguez posted more pictures on her personal Instagram account. She duplicated the two that Ronaldo had and added a few more during a visit to the yearly carnival held in the neighborhood theme park, Riyadh Winter Wonderland.

The pictures showed the family enjoying themselves while playing carnival games for enormous plush prizes, making slime, posing with superhero costumes, and riding a merry-go-round.

Alana Martina, 5, twins Eva Maria and Mateo, 5, and son Cristiano Jr., 12, are the couple’s children. In April 2022, Ronaldo and Rodriguez announced the passing of their infant boy and the arrival of Bella Esmeralda.

In late December, word spread that Ronaldo had signed a contract with a Saudi Arabian soccer team.

Following his tumultuous and contentious departure from his last team, Manchester United, the striker garnered media attention the preceding month.

“The vision of what Al Nassr are doing and developing in Saudi Arabia both in terms of men’s and women’s football is very inspiring,” Ronaldo said after signing with the Saudi club. “We can see from Saudi Arabia’s recent performance at the World Cup that this is a country with big football ambitions and a lot of potential.”

Georgina Rodriguez, meantime, has published images from the couple’s excursion to the amusement park.

She posted a total of 10 photographs on her Instagram account, and the post has already received more than four million likes. In addition to the images, she also wrote: “Riyadh, how beautiful you are.”

As a part of the Riyadh Season entertainment festival, a carnival called Riyadh Winter Wonderland is conducted every year. The General Entertainment Authority of Saudi Arabia oversees the annual event.

One of the biggest events scheduled as part of the most recent Riyadh Season is a friendly match between Paris Saint-Germain (PSG) and a team made up of players from Al Nassr and Al Hilal.

On Thursday, January 19, in the King Fahd Stadium, Cristiano Ronaldo will serve as the captain of the Riyadh squad.

After finalizing his transfer to Al Nassr, Cristiano Ronaldo relocated to Saudi Arabia with his partner Georgina Rodriguez and their kids.

There were doubts, nevertheless, as to whether the couple would be permitted to cohabitate in the Islamic nation.

Cohabitation between unmarried couples is prohibited by Saudi Arabian law. There were rumors that Ronaldo and Georgina would experience a financial difficulty as a result of the law.

Since then, it has come to light that the couple will be permitted to cohabitate against the law’s prohibition.

However, it appears that the pair has not yet located a long-term residence. Reports claimed that they currently stay in an A-list hotel.