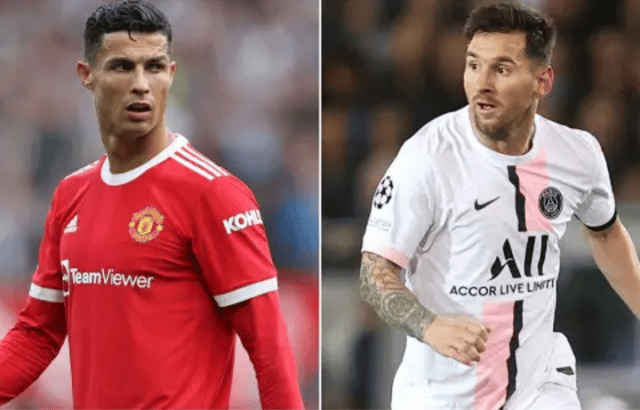 Cristiano Ronaldo has not been in awesome form this season unlike his Arch rival Lionel Messi who has been on fire ao far.

Both Messi and Ronaldo moved to a different team last summer with the intention to try something new and probably dominate.

But Lionel Messi had a disappointing first season at PSG after everyone hoped he would dominate the league, the Argentine only scored 11 goals and provided 14 assists which were below his high standards.

Cristiano Ronaldo and Lionel Messi are still the two most well-known football players in the world, despite approaching the end of their elite professional careers.

Along with their outstanding standing at the top of the sport, both players performed fairly well in the 2021–22 season, demonstrating their continued ability to compete at the highest level.

Ronaldo intended to leave Man United in the summer of 2022 because he wanted to play Champions League football, which the Red Devils couldn’t offer him following their worst Premier League finish ever the previous season.

When the transfer window closed at the beginning of September, Ronaldo was still a United player because he was unable to sign with another team.

Messi had a far more laid-back summer in 2022 than he did in 2021, staying at Paris Saint-Germain rather than switching teams as he did in 2021.

The legendary Barcelona player departed Camp Nou for free in August 2021 as they were unable to renew his contract due to financial complications.

Ronaldo and Messi are frequently compared, with their supporters fervently discussing who is the best of all time, even though they both left La Liga and no longer compete in the same domestic competition.

So far in the 2022–2023 season, here are how their performances are compared:

In the 2022–2023 season, Messi has already scored more goals than Ronaldo. The PSG player has four goals in nine games across all competitions, whilst Ronaldo has just one goal—a penalty kick goal in the Europa League.

Following his request to leave Manchester United, Ronaldo missed practically the entire preseason, which prevented him from starting in their Premier League opener against Brighton & Hove Albion.

Ronaldo came off the bench in the second half with Man United behind 2-0, but he was unable to score as Ten Hag lost his first competitive game in charge of Man United.

In the following game, in which Man United lost 4-0 in London, Ronaldo started and played the complete 90 minutes away at Brentford.

The 37-year-old participated in a total of 80 minutes of United’s four straight victories over Liverpool, Southampton, Leicester, and Arsenal off the bench.

Ronaldo scored his first-ever Europa League goal and his first goal of the season during United’s 2-0 victory over Sheriff Tiraspol.

In his first game of the 2022–23 season, a 4-0 victory over Nantes in the Trophee des Champions, Messi scored his first goal of the year. Messi passed the ball into the open net with his weaker right foot after Neymar’s deflected through-ball found the Argentine.

Messi scored twice in the Ligue 1 season opener over Clermont Foot to start the league campaign. As the clock approached 80 minutes and PSG led 3-0, Messi sauntered forward, linked up with Neymar, and then flicked the ball with his left foot into the far corner.

As far as the performances of these two football greats are concerned, the season is still very young to make any conclusions yet. Hence, let us get more popcorn ready as we continue to watch what Messi and Ronaldo still have in store for us this season.