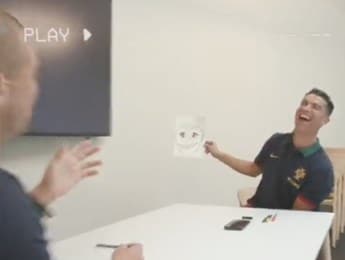 Cristiano Ronaldo has laughed off a hilarious sketch of Portugal teammate Nicolas Pepe in a drawing task.

The team was given a drawing task, with players paired with each other to test their skills while occupying them with a meaningful group activity.

Each member of the squad took to the paper to draw each other as they were paired.

Everyone came out with their own versions of their teammates after the session.

Ronaldo turned out a hilarious sketch of Pepe, which was in no way close to the looks of the defender.

He could not help it after he finished drawing as he burst into laughter with other teammates.

Despite the hilarious portrait of Pepe, Ronaldo showed off his drawing skills which was very far from perfection.

However, the scene and the mood of the players deeply engrossed with their pens and papers deserving some bits of attention.

They were all filled with joy and laughter after the task, with no one even close to having a rough sketch of his pair.

Portugal will take on Ghana in their opening World Cup encounter on Thursday, November 24. The game will kick-off at 17:00.

It is evident Ronaldo, the team captain is in high spirits to power the team to a successful World Cup campaign.

From all indications, Ronaldo could start the World Cup opener against Ghana as the former Real Madrid star said to be in a good mood ahead of the game.

This drawing test and Ronaldo’s reaction have confirmed that Ronaldo has no worries about his Manchester United future after the controversial bombshell interview with Piers Morgan.

After Ronaldo finished his drawing, Pepe walked up to him, asking to see what the football icon has drawn. Ronaldo asked him to wait a minute as he tidied up the drawing.

He then pulled it out and burst into great laughter because the image was hilarious and far from Pepe’s actual facial physique.

People also took to his pen and started carving out the face of the Ballon d’Or winner on paper. Although he did better than Ronaldo, he was still far from Ronaldo’s physique.

It was indeed an exciting and significant moment to stir up the team’s spirit ahead of their game, and Ronaldo actively took part in the drawing test.

Meanwhile, while Cristiano Ronaldo is busy enjoying himself with his teammates, Manchester United are head-on with the plan to terminate his contract.

As things stand, it is apparent Ronaldo timed the interview and anticipated the outcome. He may not return to Old Trafford again after the World Cup, but evidently, that is not his problem.

He is focused on the FIFA World Cup and, after then, plays for a few more years for his preferred club and then hang his boots. 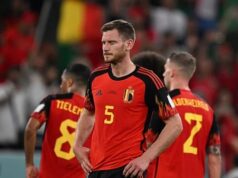 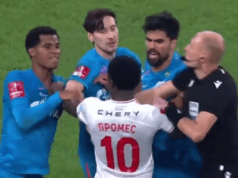