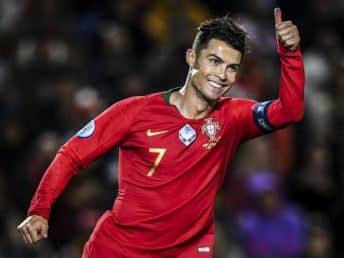 Cristiano Ronaldo has confirmed that he will play for the Portuguese national team in the 2022 FIFA World Cup in Qatar and the European Championship in 2024 even after clocking 39. Ronaldo stated this at the Quinas De Ouro awards indulging all football lovers to continue ‘taking a little load of Cris.’

Regarded as one of the greatest footballers the world has ever known, Cristiano Ronaldo may not hang his boots anytime soon after his comments at the Qunias de Ouros awards. Ronaldo hopes to play in the 2022 FIFA World Cup with other Portuguese youngsters. He also hopes to represent the national team in Euros 2024 even though he will be 39-year-old before then.

With 117 goals and 189 caps for Portugal, guiding the team to European Championship glory in 2016, he has been regarded as one of the best players in the history of the Portuguese national team. Nevertheless, his decision to continue to play for the national team till 2024 at the grand age of 39 may be met with mixed reactions.

Already, pundits have maintained that the 2022 FIFA World Cup in Qatar might be Ronaldo’s last major tournament, but the Manchester United star has confirmed his decision to continue till 2024. Speculations on his possible retirement after the 2022 World Cup was linked to his recent form since the beginning of the 2022/23 football season.

Related
Can Soccer Games End in a Tie? What Happens if There’s a Tie?

Cristiano Ronaldo’s return had been a tale of disappointment. Although he bagged 24 goals last season, ending the season as the Red Devils’ highest scorer, his second spell at Old Trafford has seen his form and rating drop drastically.

Moreso, Cristiano Ronaldo has struggled under Erik Ten Hag, starting just three matches with only one Premier League start and two in the Europa League. After nine competitive games, Ronaldo has scored only one goal after converting a spot kick against Sheriff Tiraspol in Moldova in the Europa League. He is yet to register a Premier League goal this season.

Despite the sharp and drastic slump in his career, it appears that the legendary Man United forward is ready to continue battling to revive his career for at least two years more. Speaking at the Quinas de Ouro awards, Cristiano Ronaldo said: “I hope to be a part of the Federation for a few more years.

“I still feel motivated, my ambition is high.”

Speaking about his award which identifies him as Portugal’s all-time leading scorer, Ronaldo added: “I am proud to receive an award of this magnitude.

“I never thought that one day I could achieve it.

“I thank everyone who was important in my career.

“It has been a long road, but I would like to say that my road is not over yet. . I want to be part of this World Cup and the European too. Take a little more load from ‘Cris”.

Despite his poor form with the Red Devils, Cristiano Ronaldo has a place on the Portugal national team. Whether he can finish strong in the twilights of his football career is a question only time will answer.