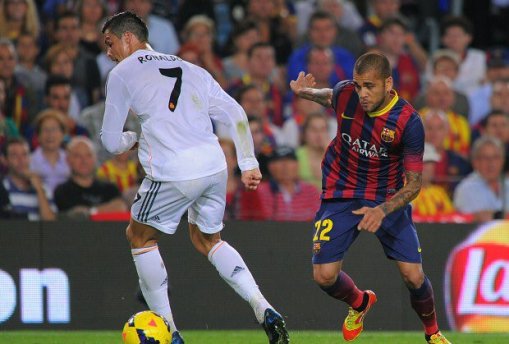 Dani Alves, a former Barcelona left-back, called former Real Madrid star, Cristiano Ronaldo, a bastard and also named him the toughest footballer he had ever played against.

The 39-year-old Brazilian also insisted that Ronaldo does not allow him to hold his breath in any football game.

In addition, Alves said Ronaldo is the kind of opponent who will wreck you and make you seem foolish if you are only partially focused on him.

“Cristiano Ronaldo. This b*stard doesn’t let you breathe for a second. I didn’t do too badly, but it’s hard. He’s a scoring machine,” Dani Alves told Marca, when asked to name his toughest opponent.

”When I was with Guardiola, I believe I caused him more suffering than he did me”, the Brazilian added.

The pair had head-to-head 30 times throughout their respective careers.

Alves and Ronaldo played against each other for a long time in the El Classico of the Spanish League. Alves was Barcelona left back for an incredible eight successful years.

Because of his physicality and ruthlessness, Ronaldo often faced strong challenges from Alves whenever the Portuguese football icon played against Barcelona then.

Ronaldo now plays for Manchester United after three years at Juventus. The Portuguese enjoyed a trophy-laden decade at Real Madrid and left the club as the all-time highest goal scorer, breaking the record of Spanish attacker Raul.

Alves now plays at Liga MX club UNAM after Barcelona failed to renew his contract in a bid to register newly signed players.

The defender has already made ten appearances with no goals, although he has four assists to his name this season which is a good start for a right back.

In an interview, the defender picked his former teammate, Lionel Messi, as the greatest player of all time, ahead of Pele and Ronaldo.

Alves gave a concrete reason why he chose Messi ahead of Pele as the greatest player in the world. He said, “Pele changed football, but Messi changed generations.”

In addition, the Brazilian said when you are talking about the greatest player of all time, Pele doesn’t belong in the debate even though he won three World Cups with Brazil.

What next for Alves and Ronaldo?

The Club Universidad Naciola will welcome Cruz Azul on September 17, 2022. Alves will be in contention to play for the team that currently sits in the 16th position on the Mexican League table.

With 14 points from 14 games, that is really poor stats for the football club. Winning the league is out of reach now, and they need to gather maximum points moving forward.

On the other hand, Ronaldo will travel down to Portugal for the international break after he was called up by Portugal manager Fernando Santo.

The Manchester United striker will start for Portugal against the Czech Republic on September 24, 2022 at 7:45 pm in the Nations League before facing Spain on September 27, 2022.