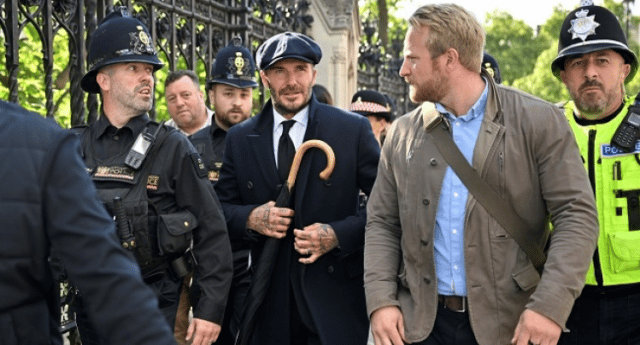 David Beckham, a former captain of England and co-owner of Inter Miami, stood in line with thousands of others to pay his last respects to the late Queen of England, Queen Elizabeth II for more than 13 hours on Friday, September 16, 2022.

As mourners waited in a long line to see the queen’s coffin one last time at Westminster Hall before her funeral on Monday, Beckham, 47, was spotted in the line.

When he was questioned by reporters while waiting for his turn to see the casket of the late queen on Friday afternoon, the former Manchester United and Real Madrid midfielder claimed he had been waiting since around 2.15 a.m. BST.

He mentioned sharing crisps, candy, and donuts with his colleagues and ‘line waiters’ to keep everyone’s energy levels up.

Beckham, who had multiple encounters with the queen over her 70-year reign, was captured on camera at Westminster Hall appearing emotional as he waited to pass by her casket.

Around 3.25 p.m. BST, Beckham stopped by the casket to pay his last respects to the late queen. Immediately he got close to the casket, he briefly closed his eyes.