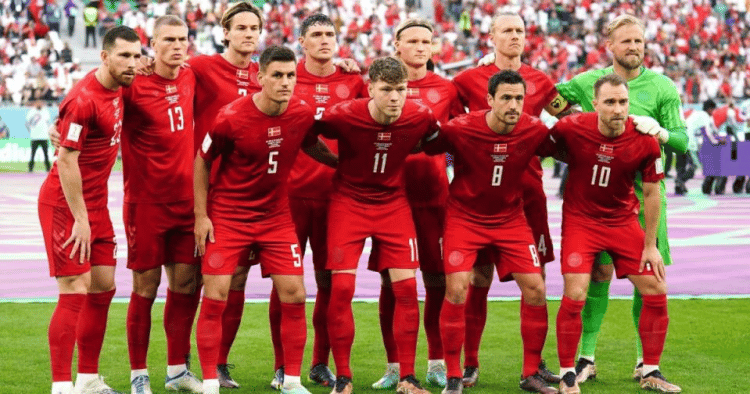 Denmark is preparing to hold discussions with other UEFA members including England that are at Qatar about possibly leaving FIFA.

Before backing down due to the prospect of receiving yellow cards every match, Denmark was one of seven nations, including England and Wales, that intended to wear One Love armbands.

Jesper Moller, the head of the Danish FA (DBU), claimed that Denmark is considering leaving FIFA and is prepared to hold negotiations with any of the 55 countries that make up UEFA, including England.

They are open to discussing a complete expulsion from the global authority.

The DBU delegation expressed their “anger” over Fifa’s threat to impose sports sanctions on the seven captains who intended to don the One Love armband.

Gianni Infantino, the head of FIFA, will not receive official backing from Denmark in his campaign for re-election as president.

Moller declared:  “There are presidential elections in FIFA. There are 211 countries in FIFA and I understand that the current president has statements of support from 207 countries.”

“Denmark is not among those countries. And we’re not going to be either.”

On Denmark’s effort to leave FIFA, Jesper Moller added:  “It is not a decision that has been made now. We have been clear about this for a long time. We have been discussing it in the Nordic region since August.

“I’ve thought it again. I imagine that there may be challenges if Denmark leaves on its own. But let us see if we cannot have a dialogue on things.”

“I have to think about the question of how to restore confidence in FIFA. We must evaluate what has happened, and then we must create a strategy – also with our Nordic colleagues.”

Germany, France, Belgium, Switzerland, England, and Wales had all intended for their captains to don One Love armbands in Qatar.

The armband advocates for equality and LGBTQ+ rights because same-sex relationships are forbidden in Qatar.

But Fifa cautioned the seven captains that the “minimum” punishment for donning the armbands was a yellow card.

Jakob Jensen, the CEO of DBU, said: “On November 21, England asked for an emergency meeting with FIFA, who came to the English hotel. FIFA said it would at least give a yellow card.”

“There has been discussion about whether there is a legal basis for giving a yellow card, but there is.”

“The penalty could have been a yellow card, that the captain had not come on the pitch or that he was given a ban.”

Will Denmark and Other UEFA Nations Leave FIFA?

Rumors that the Danish Football Association (DBU) will leave FIFA in the wake of a controversy over the “OneLove” armband are unfounded, the association told Reuters.

Following a news conference on Wednesday, reports in the media claimed that DBU President Jesper Moeller had stated that the FA was thinking about leaving the organization that oversees world football after Denmark and six other European teams were threatened with sporting sanctions if they wore the armband.

“Some media have made the misunderstanding that DBU will withdraw from FIFA,” Jakob Hoejer, the DBU’s director of communications, informed Reuters over WhatsApp.

“That was not said at the press conference. We’re critical and not satisfied and we’ll not vote for the present FIFA-president (Gianni Infantino). We will discuss further actions with our Nordic and European colleagues.”

The Danish FA disclosed that FIFA had threatened sporting consequences such as yellow cards “at a least” for wearing the armband, which is a part of a campaign to celebrate diversity, during the news conference earlier on Wednesday.

Due to this, the seven European countries who were going to wear it—Denmark, England, Wales, Germany, Switzerland, Belgium, and the Netherlands—decided against it.

Instead, prior to their opening match against Japan on Wednesday, the German players placed their hands over their mouths in protest against FIFA’s decision to keep them quiet.

While watching the game with FIFA President Infantino, German Interior Minister Nancy Faeser wore the “OneLove” armband, according to a statement from the German Football Association, “denying us the armband is the same as denying us a voice”.