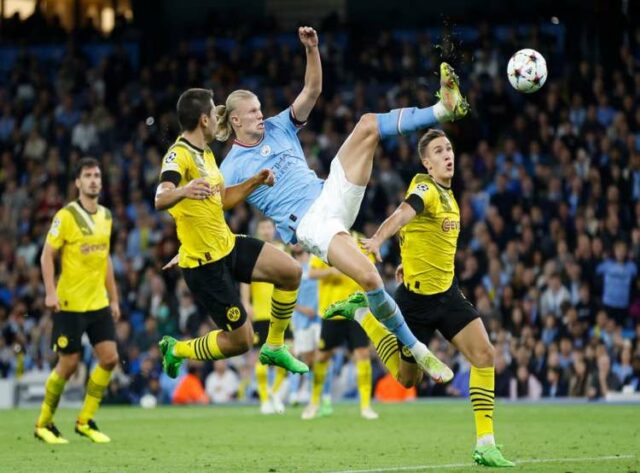 Erling Haaland made the difference in the 84th minute with a superb acrobatic display that earned Manchester City a deserved win over a resilient Borussia Dortmund. Haaland provided a stunning and magnificent finish from Cancelo’s cross as he finally gets the better of his former club, who had gone into a surprise lead in the 54th minute.

Erling Haaland provided a brusque but classic response when it all seemed that he had been tamed by his former club Borussia Dortmund throughout a pulsating Champions League clash at the Etihad Stadium on Wednesday. The prolific Norwegian ace rose to the occasion late into the second half of the game when Stone’s thunderbolt strike from outside the box leveled the scores in the 80th minute.

Dortmund had nearly succeeded in muffin Haaland throughout the game. As at 80 minutes of play, Haaland only had 26 touches of the ball, the least by any other player on the pitch.For well over 80 minutes Dortmund. However, that did not stop him from doing what he knows how how to do best.

Even by the Norwegian’s increasingly sky high standards, the winner was superb and impressive. The assist – a great outside of the boot cross by Joao Cancelo – was equally a perfect one.

Haaland muddled his way through two Dortmund defenders who had wedged him on both sides to delier one of his most famous atrikes known as the phantom goal. He got a pat in the back after the goal by his boss Pep Guardiola who said that the 22-year-old replicated the phantom strike typical of John Cryuff, his former Barcelona manager, perfectly.

“What a goal. I remember a long time ago in Barcelona Johan Cruyff scored one quite similar against Atletico Madrid. It’s nice Erling emulated Johan Cruyff.

It was as if the Premier League giants would end the night in a disappointing draw, but it turned out ti be a night to remember as Erling Haaland once again remind them of his game-changing qualities as their number nine. He has now scored 26 goals in 21 Champions League appearances, a goal every 62 minutes on average.

Speaking on BT Sport, former Manchester United and England defender Rio Ferdinand said: “What I love about him is a lot of strikers would panic when they aren’t getting much of the ball. He is calm and just thinks, I want goals. It is all about the end product and winning games for Haaland.

“Only certain players can go into a winning dressing room and fit in seamlessly, there has to be arrogance and confidence. He is delivering so much.

“He [Guardiola] isn’t trying to compare them [Cruyff and Haaland] as players but they are players who come up with moments. Only he was going to score that goal tonight.”

Jude Bellingham praised his team for standing strong that long against a Manchester City swarming with quality and high-profile stars, but he admitted that the defeat was hard to take.

“It was not one of those games where you can get on the ball and have loads of possession,” said Bellingham afterwards. “We knew we’d spend the majority of the game without the ball.

“We were brilliant for 75 minutes but that’s enough time for City to put you away.

“That’s what great teams can do. You don’t give them a sniff, and out of nothing, they score and tilt the game back in their favour.”

Before joining Manchester City from Borussia, Dortmund raked in 86 goals in 69 appearances for Borussia Dortmund. He was a top frontline attacker for the Bundesliga giants. In Manchester City, Erling Haaland has already bagged 13 goals in appearances for the Citizens. He is currently the Premier League top-scorer after six matches and is leading the list of nominees for the August player of the month award.

Reacting to his winner against his former team, Haaland said he ‘does not care’ about what people think about him ‘having less touch of the ball’ during the match. But his focus and dream is to ‘score five goals in every five touches of the ball.’

Manchester City tops Group G after the win, garnering a maximum of six points from the two matches, followed by Borussia Dortmund with there points. Copenhagen and Sevilla are bottom of the group with one points each.