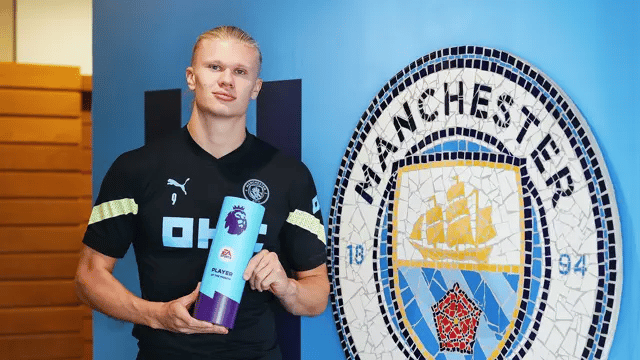 Erling Haaland, a striker for Manchester City, has been chosen as the August Premier League Player of the Month.

The Norwegian international has had a phenomenal start to life at the Etihad after joining the Club from Borussia Dortmund in the summer. He scored nine goals in August alone.

The 22-year-old scored twice on his debut for City, which helped them defeat West Ham 2-0 on the first day of the new campaign.

Before scoring back-to-back hat-tricks in Etihad triumphs over Crystal Palace and Nottingham Forest, he struck again in a 3-3 draw at Newcastle.

The Norwegian forward said: “I am delighted to win this award for the first time – it was an incredible start of the season for the team and I am grateful to everyone who voted.

“We all wanted to hit the ground running this season, so winning four games out of five was a great start for us in what is the most challenging competition in the world. I am happy to have played my part by scoring goals.

“What’s important is the result and to help the team. Hopefully, I can continue to support the team, make our fans happy with our performances and carry on our strong start to the season.”