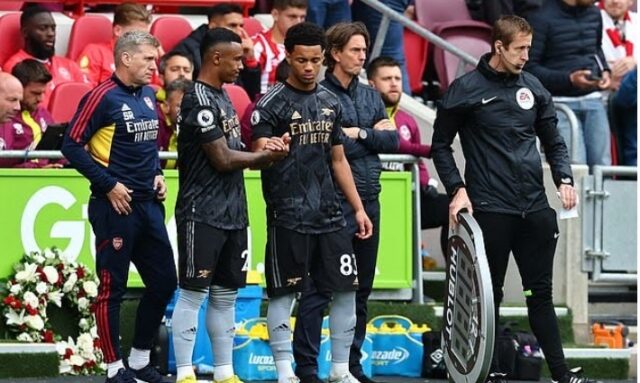 Ethan Nwaneri has become the youngest player ever to play in the Premier League after he made his debut for Arsenal in a 3-0 win over Brentford. Ethan Nwaneri turned 15 years and 181 days old today, September 18, 2022, as he featured for the Gunners in a convincing thrashing of Brentford at the Gtech Community stadium.

After guiding Arsenal back to the Premier League summit after a convincing 3-0 thrashing of Brentford, Mikel Arteta made history by handing Ethan Nwaneri a chance to make his debut for the Gunners, making the 15-year-old youngster the youngest player ever to play in the Premier League.

Before now, Elliot Harvey who currently plays for Liverpool held the record while at Fulham. The young midfielder had only turned 16 when he made his Premier League debut for Fulham on May 4, 2019, against Wolves.

Mike Arteta named Ethan Nwaneri after the teenager was promoted to the first team training squad following a sterling performance in the youth team. The 15-year-old had scored four goals and delivered four assists at the Arsenal U-18 and U-21.

Earlier today, September 18, Ethan Nwaneri came off the bench at stoppage-time to replace Fabio Vieira against Brentford. Ethan’s chance came after an injury blow hit Mikel Arteta’s squad with the likes of Martin Odegaard and Oleksandr Zinchenko ruled out of the squad.

The youngster was to spend the 2022/23 football season playing for the Gunners Under 18s but had to be promoted to the Under 21s after a brilliant showing.

Nwaneri was not expected to make an appearance in the game against Brentford despite making the bench, but Arteta decided to include the youngster showing a recognition of the progress he has made so far at the youth level.

Former Arsenal and Liverpool star Cesc Fabregas has now been dislodged as Arsenal’s youngest player after he featured for the Gunners at the age of 16 years, 177 days in 2003 against Rotherham in a League Cup match.

Related
What is an Average Height of a Soccer Player?

Ethan Nwaneri is a 15-year-old England international. He is born to Nigerian parents. Nwaneri started his football career with the Arsenal youth team in 2016 and has played for the U-18 and U-21 for 6 years before making his first debut for the Gunners in 2022.

Ethan has been described as a “number 10” that plays with flair. He can also dribble well. His versatility enables him to play wide as well as central.

Ethan made his debut for Arsenal in a 3-0 win against Brentford; a game that saw the Gunners return to the summit of the Premier League after slipping off to Manchester City and Tottenham.