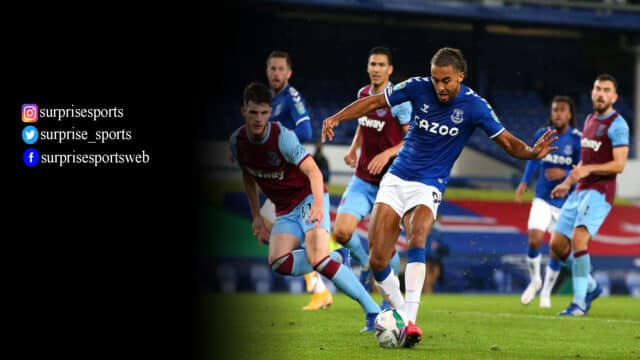 Everton will host West Ham as two struggling sides in the Premier League face off on Sunday at Goodison Park. Here we have Everton vs West Ham prediction, team news, lineup, head-to-head, start time, and where to watch live.

Where in the world are you watching us today?! 🗺#EVEWHU pic.twitter.com/QbDPGhZ8DB

Everton has been the draw specialist this season in the Premier League. They have drawn four and lost two games so far.

Frank Lampard’s side is coming off a 0-0 draw in the Merseyside Derby in gameweek 6 before gameweek 7 was postponed.

However, the Toffees are sitting ahead of West Ham on the table with the same points.

West Ham started the Premier League campaign with three straight defeats against Man City, Nottingham, and Brighton. They came back with a 0-1 away win over Aston Villa before sharing the spoils with Spurs and losing 2-1 against Chelsea.

Frank Lampard will be without his starting goalkeeper Jordan Pickford. Asmir Begovic will start between the posts.

Dominic Calvert-Lewin was unavailable due to a knee injury. He could play some minutes in this game.

“All we want is Dominic fit and firing but it is difficult with injuries as it can easily happen when you get one and then another one comes,” said Lampard ahead of the game.

West Ham will be without Ben Johnson and Nayef Aguerd due to injuries. However, David Moyes could rotate his men after being busy with the UEFA Conference League fixture.

“I think it is important to try and use the players as best as we can,” Moyes told reporters on Friday.

West Ham won three of the last four head-to-head meetings against Everton. Two of those wins were in Goodison Park.

Everton and West Ham are two struggling sides in the Premier League. Frank Lampard’s men have been the draw specialist with a 4-match drawing streak. They are yet to taste their first victory this season.

On the other hand, David Moyes’ men are behind Everton with the same points. They won only one of their six league games.

It would be a low-scoring affair. We predict Everton’s drawing streak will continue. Everton 1-1 West Ham.

The Gameweek 8 tie of Everton and West Ham will be available live on Sky Sports Main Event and Premier League. The live broadcast will start at 2:05 pm BST.

Sky Sports subscribers can watch the live stream via the SkyGo app.