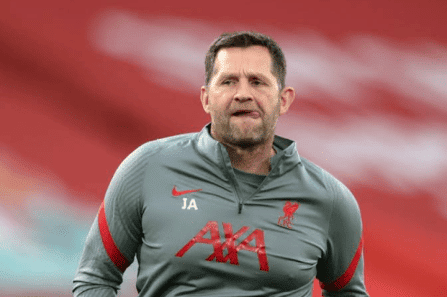 The English Football Association has fined and banned Liverpool goalkeeper coach Achterberg for abusive gestures during the Red’s game against Newcastle. This punishment follows an investigation into a clash between Liverpool and Newcastle team’s coach during a heated match between the Red Devils and the Magpies.

Liverpool had the better of a resilient Newcastle team, but they needed Fabio Carvalho’s 98th-minute header to grab all three points for the Reds.

It was pure unbridled drama at the end of the game. Aleksandr Isak had given the visitors a surprise first-half lead in the 31st minute. Liverpool found no way through as Newcastle’s brilliant defending ensured that the Magpies went into the break with a 1-0 lead.

The second half was more dramatic as Liverpool increased pressure on Newcastle for an equalizer. Their efforts paid off in the 61st minute. Robert Firmino struck to give the host a deserved equalizer.

Newcastle retreats further off their half as they tried to settle for the spoils and settle for a draw. It was not to be, as Liverpool was readily wrapping off the game with a win.

Although they dominated possession and took the game to the Magpies in their box, they found it difficult to break the defense for a winner.

The match drones on with Newcastle howling tediously to the 1-1 draw until the last stroke of time. It was more of a drama in the 98th minute when the game had almost ended in a draw.

In a gut-wrenching experience for the visitors, Carvalho scored with the last kick of the high-pitch game. Newcastle has failed to clear a corner delivered into the box. It bounced around the penalty area before Carvalho volleyed it into the back of the net from close range.

And there comes the final immediately after the winning goal. It was indeed a sad one for Newcastle, who had labored all through to keep the match in the favorable margins of a 1-1 draw.

Meanwhile, tensions were beginning to gather between the coaching staffs of both teams after Fabio Carvalho’s dramatic late-winner. A review by the English FA has indicated that a Newcastle assistant coach, Daniel Hodges, had appeared to throw an object at the Liverpool technical area sparking the clash between both sides.

Achterberg, Liverpool’s goalkeeping coach, has admitted using abusive and insulting gestures. Both men have admitted their behavior was improper.

They have been banned from the touchline for a fixture and warned from repeating similar conduct in the future. Achterberg has been slammed with a £7000 fine, while Hodges receives a £6000 penalty.

The Red Devils were expected to take on Chelsea in the Premier League matchday seven fixture, but the match has been postponed as preparations for the burial of Late Queen Elizabeth II gather momentum.