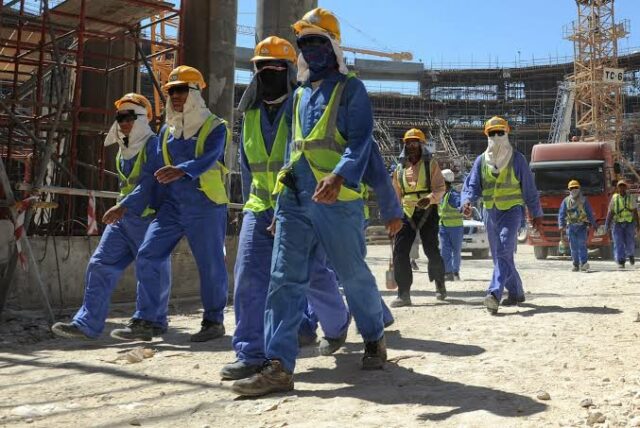 FIFA has issued a statement responding to accusations of poor treatment of migrant workers in Qatar. The respondents demonstrated massive support for compensation plans for migrant workers and the creation of the Migrant Workers Center.

Sixty-Seven percent of a YouGov poll commissioned by Amnesty International want their national Football Associations to speak publicly about the human rights issues associated with Qatar World Cup, including calling for migrant workers to be compensated

About 3% of adults in 15 countries believe that revenues generated in the World Cup should be used by FIFA  to compensate workers who suffered in preparing for the 2022 World Cup in Qatar. This was confirmed by a YouGov poll commissioned by Amnesty International.

Sixty-seven percent of the respondents also want their national FAs to be vocal on human rights issues and abuses which have been associated with the tournament, including calls for migrant workers to be compensated

Also, the poll shows that those who are more likely to watch the tournament are very high, at 84%. The majority also believe that a remediation programme should be established by FIFA before the tournament kicks off on November 20.

The FA supports the creation of a Migrant Workers Center and believes there should be compensation for injury or death.

Meanwhile, FA chief executive Mark Bullingham has received recommendations for being one of the most outspoken and staunch advocates pushing for the creation of a compensation fund.

Details from the poll show that more than 17,000 adults across 15 countries, including Argentina, Belgium, Denmark, Finland, France, Germany, Kenya, Mexico, Morocco, Netherlands, Norway, Spain, Switzerland, the UK, and the USA were surveyed. 54 percent of them said they were likely to watch at least a game at the World Cup.

Reacting to the report, Steve Cockburn, who is the head of economic and social justice, at Amnesty International said that the findings is an inkling to the increasing call of global football leadership to ‘make amends’ and effect changes to alleviate the plight of suffering migrant workers

“These findings send a clear message to football’s leadership. Across the globe, people are united in their desire to see FIFA step up and make amends for the suffering endured by migrant workers in Qatar. They also want to see their national associations take a much firmer stance,” Cockburn said.

He urged FIFA to do the right thing as there is time to do so with 50 days remaining until the kickoff of the tournament.

“With less than 50 days until kick-off, the clock is ticking. But there is still time for FIFA to do the right thing”, he noted. “Supporters don’t want a World Cup that’s indelibly tainted by human rights abuses. The past cannot be undone, but a compensation programme is a clear and simple way that FIFA and Qatar can provide at least some measure of redress to the hundreds of thousands of workers who made this tournament possible.”

Recall that a coalition had previously launched a campaign back in May 2022 asking FIFA to set aside funds to compensate migrant workers and also prevent abuses. The campaign, which was tagged, ‘#PayUpFIFA’, was led by a coalition of human rights organizations, including Amnesty International.

The coalition demanded that FIFA should set aside a minimum of £382m ($440m) for the compensation and the equivalent it hands out in prize money at the World Cup. FIFA’s revenue in the upcoming 2022 World Cup is estimated at £5.2b ($6b).

The English FA’s position on the matter is unchanged; they have maintained that they are stronger as a collective group of national federations, rather than adopting an individual approach on such an important matter. They have agreed that there should be compensation for the migrant workers and Migrant Working centers should be created.

FIFA issued a statement which read: “FIFA takes note of the poll conducted on behalf of Amnesty International, featuring respondents from 10 countries in Europe and five countries from the rest of the world on the question of labour standards and protections in Qatar.

“Respondents may not be fully aware of the measures implemented in recent years by FIFA and its partners in Qatar to protect workers involved in the delivery of the FIFA World Cup Qatar 2022.

“As recognised by independent experts, such as the International Labour Organization and international unions, a wide range of measures have been implemented over the past years to improve protections for workers in Qatar, and these developments have come about largely as a consequence of the World Cup being played in the country.

“This also includes FIFA and its partners in Qatar applying pressure on companies when needed to ensure remediation of workers involved in FIFA World Cup preparations. Workers have been compensated in various forms where companies failed to uphold the Workers’ Welfare Standards of the Supreme Committee for Delivery & Legacy (SC), which is the standard used by FIFA and the host country to ensure the protection of workers involved in FIFA World Cup-related activities.

“These measures were complemented by the steps taken by the Ministry of Labour to enforce Qatari labour law and provide for access to remediation, such as through the Workers’ Support and Insurance Fund.

“FIFA will continue its efforts to enable remediation for workers who may have been adversely impacted in relation to FIFA World Cup-related work in accordance with its Human Rights Policy and responsibilities under relevant international standards.”