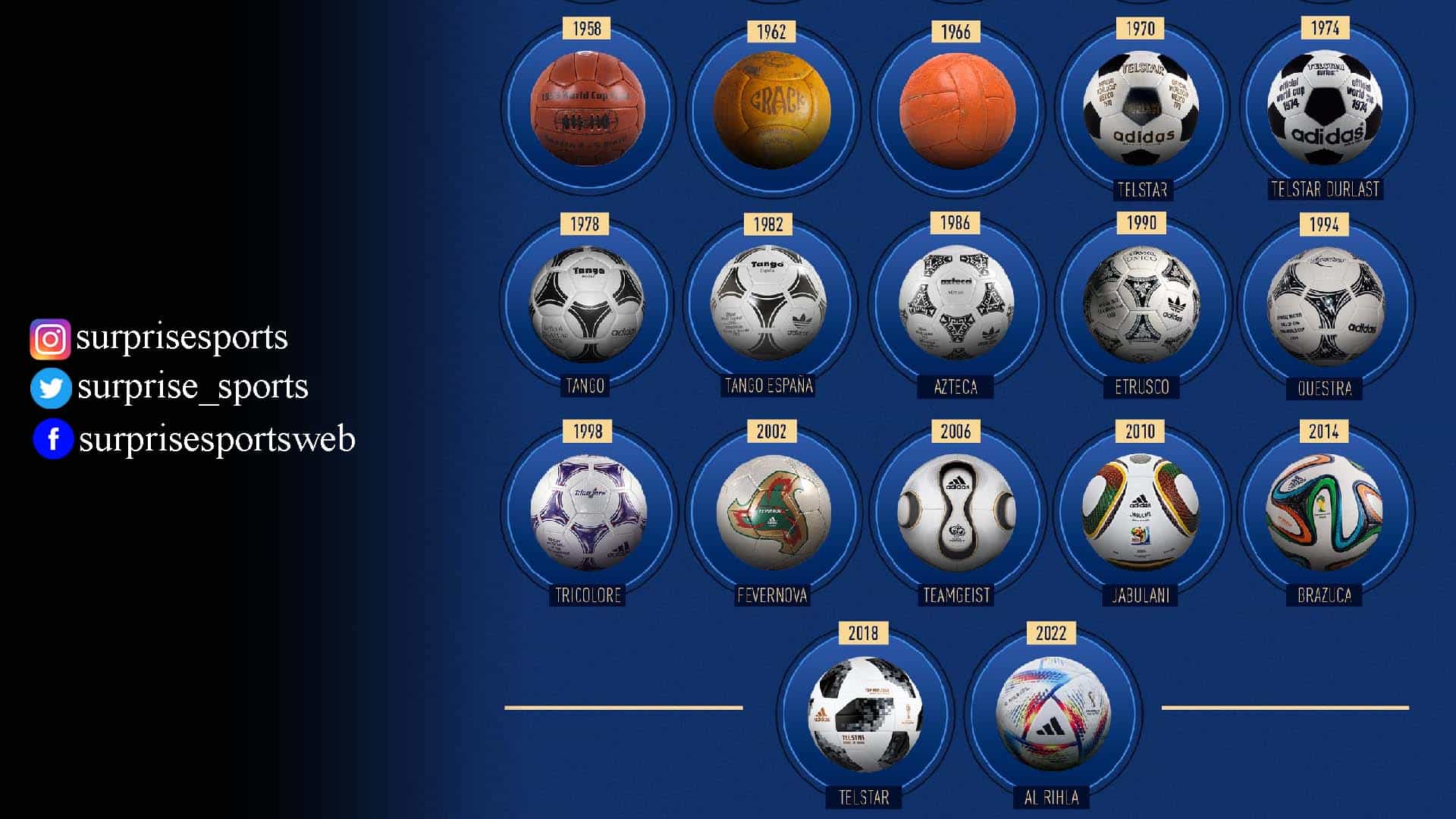 Ever since the 1930s first football world cup, we have witnessed a lot of iconic moments. All the iconic memories were made with different versions of World Cup Match Balls. Continuing the FIFA habit, ADIDAS has released images of the new ball we will see in Qatar’s FIFA World Cup 22.

ADIDAS has released images of Al Rihla on Twitter. The new football edition of the FIFA World Cup 22 in Qatar follows a unique colorful design and pattern.

Besides this year’s World Cup ball, we have ranked some previously used world cup footballs. We have classified some controversial and popular world cup balls introduced since 1970.

The 1970 FIFA World Cup was when Adidas linked its way with FIFA for the first ever. It was the first FIFA World Cup, where football began to adopt the iconic black-and-white colors of hexagon and pentagon designs.

This design became too popular over the years. The hexagon and pentagon pattern was accepted by viewers, including professional players. In fact, they could not imagine any other structure of World Cup balls other than the one resembling Telstar’s design.

Everyone likes the design and shape of the ball a lot; Even to this day, the iconic feature continues on World Cup match balls.

A total of 32 matches were played with Telstar, in which we saw 95 goals. The world cup was titled Copa Mundial de Fútbol México ’70, held in Mexico. The finale concluded when Brazil’s national football team won the match and took the cup home.

In 1974, we saw our favorite team score goals with the Telstar Durlast ball at the World Cup held in West Germany. The Telstar Durlast had quite a look on it with black, white, and golden shadows. Besides, we also got to see a completely white version in some games called Chile Durlast 1974.

During the 1974 FIFA World Cup, a total of 97 goals were scored with Telstar Durlast Ball. West Germany came out victorious in the World Cup by scoring 2–1 against the Netherlands.

The primary triad design of Tango Durlast was so successful that it was carried on for the next five years. The Tango Ball features 20 triad shape designs that comprise 12 circles around each black pentagon.

Related
How to Watch FIFA World Cup In the Dutch Language

In the 1978 FIFA World Cup, we saw a total of 102 goals. The World Cup was held in Argentina, where Argentina’s soccer team scored 3–1 against the Netherlands and took the cup.

Tango Espana was introduced to us in the FIFA World Cup 1982, held in Spain. Instead of exclusively a leather match ball, it was another water-resistance ball infused with rubber. It is listed in the history of FIFA as the last leather World Cup match ball.

In the FIFA World Cup 82, we witnessed 146 goals scored by the Tango España ball. The Finale match was between Italy and West Germany. However, Italy came out victorious by setting the score 3-1 against West Germany.

It was the first not-leather introduced in the FIFA World Cup 1986. It was also the first World Cup match ball to feature a cultural reference to the host nation. Azteca 86 featured synthetic materials that were used to make it more long-lasting and less water-absorbed.

The FIFA World Cup 1986 was held in Mexico, the first country to host a world cup twice. A total of 52 matches were played in the world cup, where we saw 132 goals. However, in the final match, Argentina’s national football team won the Cup by scoring 3-2 against West Germany.

The Etrusco Unico was the official world cup ball for the 1990 FIFA World Cup held in Italy. Its name, design, and look are a tribute to ancient Italy and the fine art of the Etruscans.

In the Coppa del Mondo Italia ’90, a total of 115 goals were scored by Etrusco Unico. The German national football team won the final match by defeating Argentina and took the cup home.

Questra means the quest for the stars, a reference to the Apollo 11 mission. The design of the ball contains space visuals and has similarities with the 1990 Etrusco Unico match ball. It is the first ball with an inner layer of polyurethane foam that repels water and keeps the ball dry.

FIFA 1994 was the first-ever World Cup held in the United States, where 52 games were played, and 141 goals were scored. Nevertheless, Brazil scored 3-2 against Italy and took the cup home.

During this FIFA World Cup, spectators were introduced to a match ball with red, white, and blue colors resembling the flag of its host country, France. However, it was the last match ball that had the old Tango pattern in it.

It was one of the best match balls featuring A layer of syntactic foam formed by a micro balloon to add durability, lightweight, and robust attributes to the ball.

The Tricolor was introduced in FIFA World Cup 1998, where we saw 171 goals in 64 matches from 32 teams. This World Cup was truly memorable for France since they got their first World Cup victory when they scored 3-0 against Brazil and took the Cup Home.

The 2002’s FIFA World Cup match ball had a unique design in the same old hexagon and pentagon pattern. The bold design was an apparent reference to the cultural view of its host countries, Japan and Korea. An artistic composition of significant gold, green and red three-sided shapes was genuinely remarkable as Japanese and Korean traditions were not so noticeable then.

However, this unique design of the World Cup ball actually attracted many visitors for its features. This ball was layered in syntactic foam to improve its accuracy and flight path consistency. More than six million replicas of Fevernova were sold during that period.

In FIFA World Cup 2022, we saw 161 goals with Fevernova in 64 matches from 32 teams. However, in the Finale, Brazil scored 2-0 against Germany and took the Cup home.

It was one of the most uniquely designed match balls. Unlike the previous ones, +Teamgeist had no Hexagon and Pentagon patterns. Due to its different pattern and unique design, players weren’t that friendly with how it looked.

Since it was the first-ever match ball with thermally-bonded panels, it attracted many FIFA lovers. Moreover, +Teamgeist was the first in the list to start the trend of introducing a particular version in the finale match. However, despite how it looked, the ball’s trajectory and precision were 3 times better than all the previous ones.

Despite all the looks and transformation, we saw 147 goals in 31 team matches in 64 with +Teamgeist. The FIFA Fußball-Weltmeisterschaft Deutschland 2006 ended with Spain winning the final by dominating Italy.

The first appearance of Jabulani was made in FIFA World Cup 2010, which was held in South Africa for the first time. Besides, thermally bonded panels in this ball were reduced to 8 to improve its spherical embodiment.

The ball’s design and pattern resemble its host country, South Africa. For example, there are 11 colors used in Jabulani, which is a remarkable reference to the number of players on each team and the official languages in South Africa.

Related
How to Watch the FIFA World Cup in Finland

FIFA World Cup 2010 witnessed 145 goals, with Jabulani from 97 players. However, competing against 31 national teams, Spain’s national football team scored 1-0 against the Netherlands in the finale.

The name Brazuca was given to this match ball by the public. FIFA officials stated that the name Brazuca symbolizes emotion, pride, and goodwill to all. It was the first-ever official match ball to have an authorized Twitter account of 2.76 million followers.

Moreover, the design of Brazuca was quite multicolored and had six thermally bonded panels. The resemblance of the culture of Brazil was remarkable since it was the host nation.

The specialty of this ball is that 65% recyclable polyurethane is used in the panels. Moreover, it has a polyurethane layer that keeps the shape durable even when shot over 1000 times with 50 kilometers/hour force.

The look and characteristics of this world cup ball were enough to draw the attention of Lionel Messi.

In 64 matches of FIFA World Cup 2018, we have seen a total of 169 goals scored by Telstar 18 from 32 teams. However, in the tournament’s finale, France scored 4-2 against Croatia and took the cup home.

Al Rihla is the latest edition of the Mach ball we will see in FIFA World Cup Qatar 2022™. The color of this ball resembles the rich culture, architecture, and national Flag of Qatar.

Al Rihla is the Arabic name that means “The Journey.” The 1% of total sales will be donated to Common Goal, making it the first World Cup ball to raise funds for social fairness and open sports access.

The new design has triangle and diamond shapes with 20 panels making it quite fancy and eye-catching. Besides, the unique characteristics of Al Rihla allow it to fly faster than every other World Cup ball.