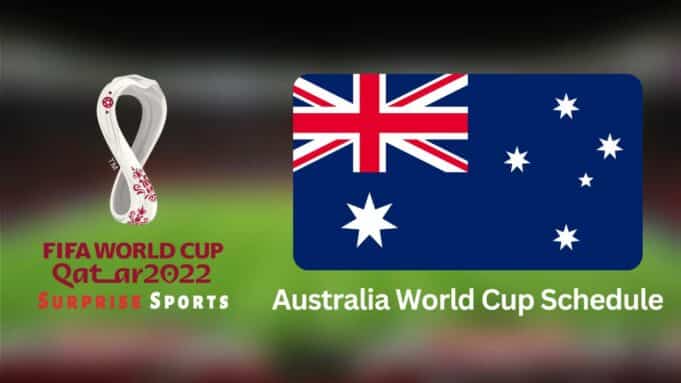 It’s been four years since the last World Cup in Russia. And we are all set to welcome the FIFA World Cup 2022 in Qatar on 20th November. Here in this episode, let’s mark the calendar with the Australia World Cup Schedule 2022.

Australia finished at the bottom of the table four years ago in Russia. The Socceroos began their campaign with a 2-1 defeat against France. They kept their hopes alive with a 1-1 draw against Denmark before losing to Peru in the last game. The Socceroos must face familiar foes in France and Denmark in this term.

Australia will play in Group D in the FIFA World Cup 2022. In the Group Stage, they will play the 2018 rematch against France and Denmark.

Australia will face the World Champions, France, to begin their campaign on 23rd November (in Australian Time). They will be keen to take all three points against Tunisia before facing Denmark.

*All times are in AEST

Who could be Australia’s Opponent in the Round of 16?

You can watch Australia’s matches in the World Cup 2022 on free-to-air SBS in Australia. SBS will broadcast all the matches live. The cable-cutters can watch the live stream via Optus Sport.

Fans in the UK can watch the tournament via BBC and ITV. BBC iPlayer and ITV Hub will provide the live streaming opportunity.