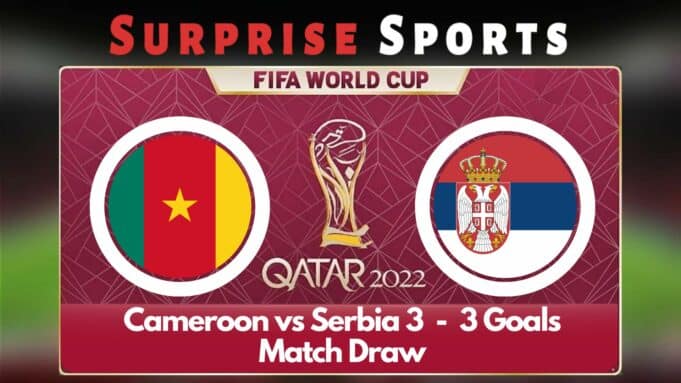 The Match Highlight: The African team is looking to turn things around in the upcoming World Cup match against Serbia. Cameroon and Serbia will face off this Monday, While the African and European nations battled in their first games of the FIFA World Cup, both experienced ups and downs with Cameroon falling 1-0 to Switzerland and Serbia losing 2-0 to Brazil. (Mon, Nov 28, 2022, 16:00) Al Janoub Stadium, Qatar. Ref: Mohamed Abdulla Hassan Mohd.

These are the first meetings between Cameroon and Serbia in all competitions since a friendly win that took place at the end of June 2010. Serbia has struggled in international competition recently, losing to African sides at the FIFA World Cup twice. They lost against Côte d’Ivoire in 2006 (2-3) and Ghana in 2010 (0-1). The biggest loss for Serbia at the World Cup has been their eight losses out of 10 games. They had won just one point within those eight matches.

45 Minutes of 1st Half: Strahinja Pavlovic scored for Serbia

48 Minutes Of 1st Half: Sergej Milinkovic-Savic scored for Serbia

53 Minutes Of 2nd Half: Aleksandar Mitrovic scored the second goal for Serbia.

64 Minutes of 2nd half: Vincent Aboubakar scored for Cameroon

66 Minutes of 2nd half: Eric Maxim Choupo-Moting Scored For Cameroon

When the score was level and Cameroon looked certain it would end without any goals, Pavlovic scored from a direct free kick. It looked as though Serbia was set to win in the first half when Milinkovic-Savic sealed the match with two beautiful long-range goals. In the final 15 minutes, however, it was equalized by Tadic then Mitrovic. So the final score is Cameroon 3-3 Serbia