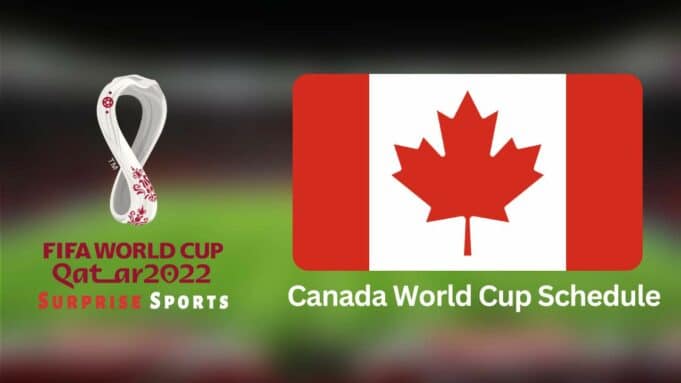 The last time Canada played in a World Cup was in 1986, with the USSR and France in the same group. The world will welcome Canada to the FIFA World Cup 2022 for the first time in 36 years. Not only that, Alphonso Davies (Bayern Munich) and co. finished top in the CONCACAF qualifiers ahead of Mexico and USMNT to reach the world’s biggest soccer (football) tournament. With the World Cup in Qatar only days away, starting on 20th November, let’s mark the calendar with the Canada World Cup Schedule in 2022.

Canada will play in Group F in the FIFA World Cup 2022.

Canada will play their World Cup opener against Belgium on 23rd November. Then, they will take on the 2018 runners-up, Croatia, before playing Morocco in their final group-stage match. Here is the Canada World Cup Schedule for 2022, including kick-off times and venues.

Who could be Canada’s Round of 16 Opponents?

Group F teams will play Group E in the Round of 16. Hence, Canada’s Round-of-16 opponent could be Spain, Germany, Japan, or Costa Rica.

Fox Sports have the World Cup broadcasting rights in the United States. FOX will broadcast 35 matches, including all from the quarter-finals onwards. On the other hand, FS1 will broadcast 29 matches live. The cable cutters can watch the live stream via the Fox Sports app, fuboTV, and Sling TV.

ITV and BBC have the World Cup broadcasting rights in the UK. Fans can watch the Qatar World Cup live on BBC channels and ITV. The cable cutters can use BBC iPlayer and ITV Hub to watch the live stream. It’s free for those who subscribe to the channels on cable or satellite.

Surprise Sports Desk - 6 February 2023, 2:12 AM
Many people are interested in learning Michael Stern net worth; read more about it. People know Michael Stren as the Father of Sarah Stren, who...