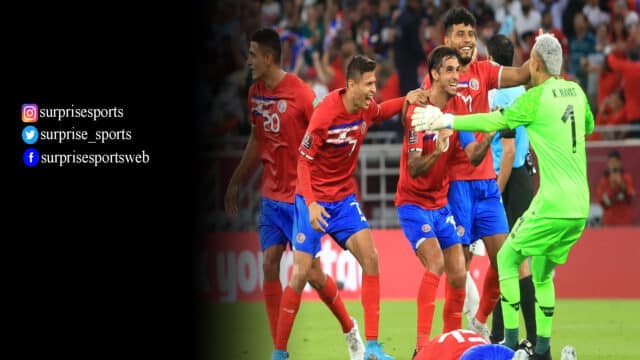 The FIFA World Cup 2022 is just around the corner. We are all set to kick off the tournament on 20th November in Qatar. In this episode, let’s mark the calendar with the Costa Rica World Cup Fixtures 2022.

Los Ticos made a Cinderella run in the 2014 World Cup. They top the group among Uruguay, England, and Italy. However, they were heartbroken by penalties against the Netherlands in the last 8.

After a disappointing tournament four years ago in Russia, can they turn things around this term?

Costa Rica will play in Group E in the FIFA World Cup 2022.

Costa Rica will play their World Cup opener against Spain on 23rd November. They will be keen to take all three points against Japan before facing Germany in their last Group-Stage game.

Who could be Costa Rica’s Opponent in the Round of 16?

Group E teams will play Group F in the Round of 16. Hence, Costa Rica’s Round-of-16 opponent could be Belgium, Canada, Morocco, or Croatia.

How to Watch Costa Rica’s Matches in the World Cup?

Fans can watch the World Cup 2022 on Fox Sports in the United States. FOX and FS1 will split the fixtures to broadcast live. Moreover, the Fox Sports app, fuboTV, and Sling TV offer live streaming services.

Related
How to Watch the FIFA World Cup in France

In the UK, you can watch the tournament on TV via BBC and ITV. BBC iPlayer and ITV Hub will provide the live streaming opportunity.

Here’s how you can watch Costa Rica’s matches from anywhere: