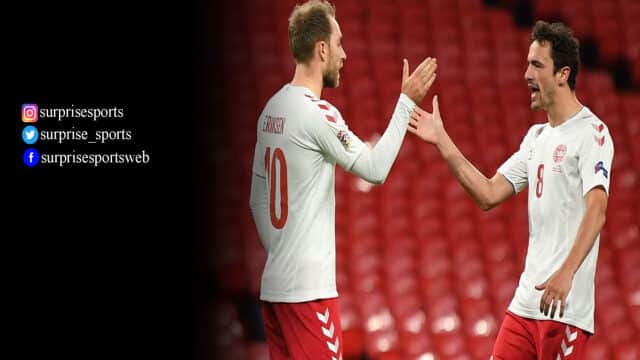 The FIFA World Cup 2022 is just around the corner. We are all set for the kick-off on 20th November in Qatar. Here in this episode, let’s mark the calendar with the Denmark World Cup Fixtures 2022.

World No. 10 Denmark will be one of the favorites for this year’s tournament. They have been in good touch and on a good run in the Nations League. They began their Nations League campaign in June with a 1-2 win over France. Moreover, Denmark beat Austria twice and lost to Croatia to sit at the top of Group A1.

In the 2018 World Cup, Denmark split points with France and Australia and won over Peru to reach the Round of 16. However, a defeat on penalties against Croatia broke the Danes’ heart.

Denmark will play in Group D in the FIFA World Cup 2022. They will meet familiar foes in the Group Stage, rematch with the 2018 group-stage opponents France and Australia, alongside Tunisia.

Denmark will take on Tunisia in their World Cup opener on 22nd November. They will be keen to take all three points before facing the World Champions France and Australia in the next two games.

Who could be Denmark’s Opponent of Round of 16?

How to Watch Denmark’s Matches in the World Cup?

You can watch the FIFA World Cup 2022 on Fox Sports in the United States. FOX and FS1 will split the matches to broadcast live. Moreover, the Fox Sports app, fuboTV, and Sling TV offer live streaming services.

Fans in the UK can watch the tournament on TV via BBC and ITV. Again, they will divide the fixtures to telecast live. BBC iPlayer and ITV Hub will provide the live streaming opportunity.

Here’s how you can watch Denmark’s matches from anywhere: