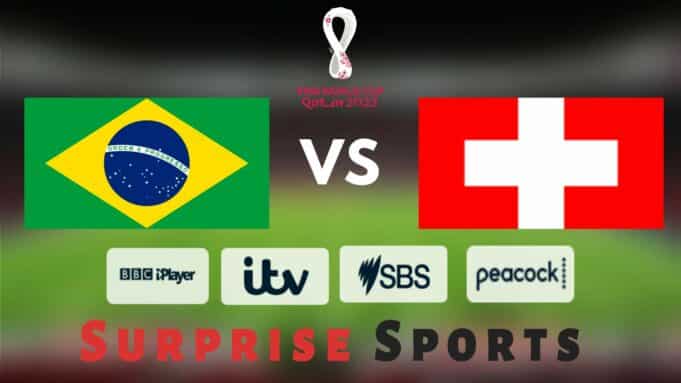 Today will be exciting for the 2022 FIFA World Cup Qatar fans and visitors. Brazil and Switzerland are slated to face each other for the group stage match, which will be an important decider for their future in the event. Here we have Brazil vs Switzerland live coverage, streaming details, date, start time, and venue.

The Group G game of today will be a crucial one. Point table leading teams in the group, Brazil and Switzerland, will play against each other in the match. The winner of the match will secure a spot for the upcoming round of 16. However, for the loser, it will be a tough battle going onward as their fate will depend on the other two teams’ performance during the group stage.

Brazil is the CONMEBOL federation’s top team at this moment. The team got qualification for the 2022 World Cup by clearing the qualification round-robin last year. With a magnificent performance during the second round, they won their inaugural match of the event against Serbia with a 2-0 this November 24.

Switzerland is one of the UEFA confederation’s founding members. The international football team ranks 15th worldwide and 11th among UEFA members in FIFA rankings. They earned a spot in the FIFA World Cup group stage by winning the UEFA Group C qualifiers. Recently they also defeated Cameroon by 1-0 in their first group-stage game.

When and Where is Brazil vs Switzerland?

The 2022 FIFA World Cup Qatar’s most extraordinary stadium, Stadium 974, will host the Group G game of “Brazil vs Switzerland”. Ras Abu Aboud, near the gulf sea, is a giant temporary venue created from recycled containers.

How to Watch Brazil vs Switzerland’s World Cup Match?

Like all the FIFA World Cup games, Fox Sports 1 will cover broadcasts of the upcoming group G match in the US. Whereas the match will be live broadcast on ITV in the UK