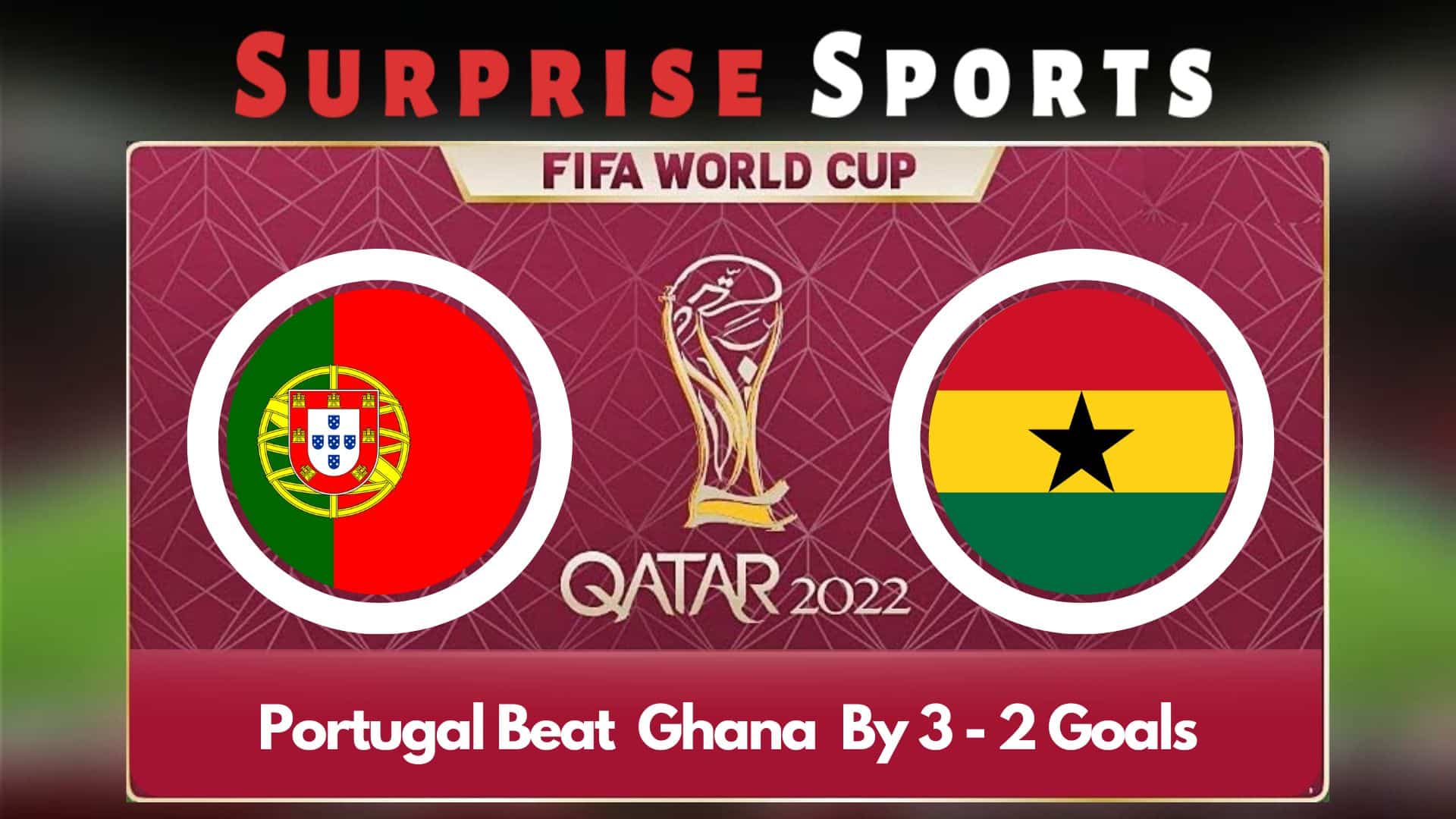 The highlight of the Match: The best players from Ghana will take the field on Thursday as they compete against Portugal’s best. Cristiano Ronaldo’s Portugal is set to start their 2022 FIFA World Cup campaign against Ghana on Thursday, Nov 24, in Ras Abu Aboud.

Portugal was knocked out at the Round of 16 stages in 2018 after losing 1-2 against Uruguay. In contrast, Ghana has yet to ever qualify for the World Cup, and this is its first qualifier for the 2022 FIFA World Cup.

While Cristiano Ronaldo’s Portugal struggled for qualification this time around, Ghana came top of their group through African qualifiers.

Portugal’s Cristiano Ronaldo is the only player in this World Cup not to play for a club. During his time with Manchester United ago, he has been criticized in the media, and it remains to be seen how he will perform here and against the competition.

Portugal will be looking to make it past the group stage as they have six times in a row. The team’s recent form is up and down against quality opponents, but they will be eager to start off on a strong note.

The Black Stars have the chance to turn around the team’s performance following a disappointing end in the Africa Cup of Nations. Their form leading up to the World Cup has been solid, but few people outside of Ghana expect them to take an impressive result.

Otto Addo has been appointed as manager, and it will be up to him to help Ghana compete better on the world stage.

Ghana has made some last-minute changes that replace Afriyie, Lamptey, Owusu, and Jordan Ayew in their final warm-up match against Switzerland. Djiku, Patey, Seidu, and Kudus are all coming on today to make up the starting lineup of four substitutes.

Hopefully, these changes will help them defeat Switzerland. Here are the Highlights Of the Portugal Vs. Ghana World Cup 2022 Match.

Kudus lost the ball in the middle of the park, and Ronaldo was freed on goal. Ati-Zigi raced off his line to stop Ronaldo’s effort with a great save. That was impressive from Ati-Zigi and Ghana.

CHANCE! Silva collates a powerful cross from Cancelo on the left flank and steers a low ball back into Joao Felix’s feet. Felix hits it with his left foot, and while he’s gone for a goal early this time, he slices it past the post.

Ronaldo blocks Djiku with his body as he tries to steal Joao Felix’s pass. He catches the ball and, with a brilliant strike of his own, fires past Ati-Zigi. The referee blows for a foul before Ronaldo can celebrate, though.

Fernandes works the ball to Otavio 20 yards from goal, and he turns to fire. However, his shot is wide of the net and straight at Ati-Zigi.

CHANCE! Ronaldo tries a give-and-go with Guerreiro, but Amartey blocks the shot from close range.

Otavio goes for a ball with Ghana’s skipper, but Ayew trips him over, and he goes down. Otavio is booked for his challenge.

WIDE. With his skates firmly planted, Seidu latches onto the loose ball on the edge of the box and swings his foot towards it. He sends his effort straight across the goalpost and into the wide-left territory.

Cristiano Ronaldo sees his effort blocked after collecting in the space in the Ghanaian box. Ghana breaks on the counter with Kudus, and he runs all the way up to Portugal’s penalty area before making a left-footed shot that goes wide of their right post.

Related
How to Watch the FIFA World Cup 2022 in Switzerland

Portugal is awarded a penalty kick as Ronaldo goes down in the box due to Salisu’s foul. Portugal has an opportunity to score here, as Ronaldo never misses from 12 yards out. Ronaldo scores from the Penalty Spot.

Save. Partey passes the ball to Kudus, who spots a strike from 20 yards on his left foot. The ball flies towards the target, and Costa catches it on the second try before gathering it in.

GOAL! Ayew Penalises The Portugal Defense. 1-1. Ghana is back in the game as Ayew draws level from close range. Kudus makes a great run behind the Portugal backline, attacking down the left inside channel. He puts a sublime cross into the middle of the box, where Ayew smashes home with his right foot at point-blank range. It’s game on.

Joao FELIX restores Portugal’s lead! 2-1!!!!! The Seleção take the lead again as Joao Felix races on to a Fernandes through ball and slots his effort over Ati-Zigi. Shortly after, Fernandes threads the needle to release Joao Felix into the inside-right channel. Still, with work to do, Felix guides his shot past the oncoming keeper to put his team back in front. That’s a cool finish from Joao Feliz.

GOAL. Leao curls home a strike from the inside channel to make it 3-1 in Portugal’s favor! Fernandes’ brilliant offload releases Leao into space, and he takes the shot for first-time, guiding the ball away from Ati-Zigi and into the bottom-right corner.

GOAL. Bukari Gets Another One Back For Ghana 3-2. The Black Stars are holding on here as Bukari steers home a header into the top-right corner.

Rahman goes down the left wing and gets the better of Cancelo before he lifts it over to the back post. It takes a deflection to reach Bukari and he makes no mistake with a perfect header to beat Costa.

65 Minutes of 2nd Half: Cristiano Ronaldo Scored from Penalty.

78 Minutes of 2nd Half: Joao Felix Scored, making it 2-1 for Portugal

88 Minutes of 2nd Half: Usman Bukari scored for Ghana. Score 3-2

It’s goalless at the break between Portugal and Ghana in their World Cup clash at Stadium 974. The best chances of the game have fallen to Cristiano Ronaldo, but he has failed to find the back of the net.

He was denied by a good save from Lawrence Ati-Zigi before spurning a glorious opening heading wide of the post from close range. Portugal has dominated the game, but they’re lacking that one goal that would count on the scoresheet.

The Black Stars have been playing conservatively at the back, not offering much. They may have been a little negative going forward and that might lead to some goals late in this half. Otto Addo will be happy with the performance and will encourage his side to play safe before taking more risks later on.

It was goalless in 1st half but in 2nd half, we have seen 5 goals. It all started with Cristiano Ronaldo’s Penalty Goal. Final Score is 3-2.