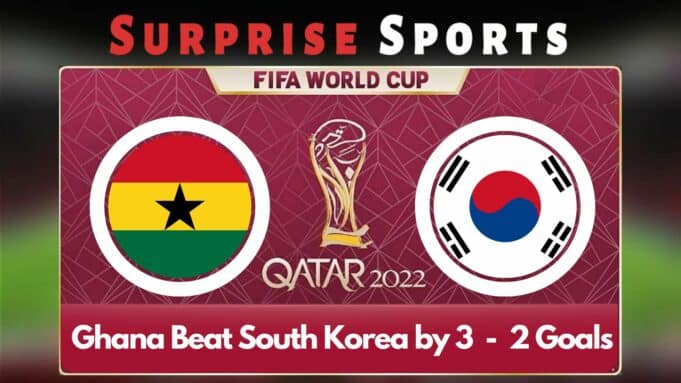 The Match Highlight: As a result of their attack-minded play in the opening game, backing a game with goals at both ends could present value for the African nation team. South Korea and Ghana meet at the 2018 World Cup Group H on Monday afternoon. Both teams are looking for their first win. Ghana put in a fighting display but they were defeated by Portugal. Uruguay also made life tough for South Korea, with a scoreless draw during their opening match. (Mon, Nov 28, 2022, 19:00) Education City Stadium, Qatar. Ref: Anthony Taylor.

This is the first meeting between Korean Republic and Ghana since a friendly in June 2014, with Jordan Ayew netting a hat-trick in a 4-0 win for the Black Stars. Korea Republic has scored exactly twice in each of their last three matches against African nations. Those wins came against Togo in 2006, drawing with Nigeria in 2010, and losing to Algeria in 2014. André Ayew has scored three goals in his last four games at the World Cup and is now Ghana’s outright second-highest scorer behind Asamoah Gyan (6).

24 Minutes of 1st Half: Salisu scored for Ghana

34 minutes of 1st half: Kuddus scored for Ghana

58 minutes of 2nd half: Cho scored for South Korea

61 minutes of 2nd half: Cho scored for South Korea

68 Minutes of 2nd half: Kuddus scored for Ghana

Ghana has been one of the most successful African sides in World Cup history. They’ve scored in each of their last six matches – the only other African side to score in more consecutive games is Nigeria (and they had eight consecutive wins between 1994 and 1998). Korea Republic have never won their second group stage game in any of their 10 previous appearances at the World Cup.

They lost their last three in a row, with two of those losses coming to Argentina (D4 L6) and Mexico (D2 L3). After conceding 2 goals in the 1st half South Korea came back strongly in the 2nd half. Though in the end it doesn’t matter because Kudus’s goal separated the both team. Final score South Korea 2-3 Ghana.