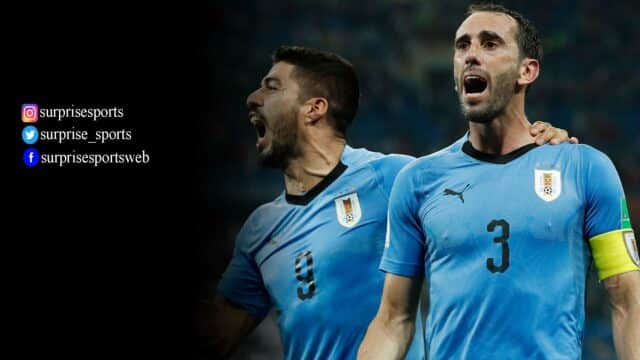 It’s been four years since the last world cup, and the FIFA World Cup 2022 is just around the corner. The sport’s biggest event will take place from 20th November to 18th December 2022 in Qatar. It will be the first winter world cup in the northern hemisphere, and we are all set to go hot in winter.

Here in this episode, let us mark our calendar with Uruguay World Cup fixtures 2022.

The two-time world champions Uruguay’s journey ended in the quarter-finals of the 2018 World Cup. They lost 2-0 against the eventual champion France. The world will see Luis Suarez and Edinson Cavani leading Uruguay one more time on the sport’s biggest stage.

Moreover, the fans will see another Uruguay-Ghana rivalry in the Group Stage this year. Again, they will take on Portugal in a 2018 World Cup Round-of-16 rematch.

Uruguay will play in Group H in the FIFA World Cup 2022.

Uruguay will play their World Cup opener against the Korea Republic on 24th November. Then, they will take on Portugal in a mouth-watering clash. The world will wait for another Uruguay-Ghana world cup drama in their final Group match. Here are the Uruguay World Cup fixtures for 2022, kick-off times, and venues.

Who could be Uruguay’s Round of 16 Opponents?

Group H teams will play Group G in the Round of 16. Hence, Uruguay’s Round-of-16 opponent could be Brazil, Serbia, Switzerland, or Cameroon.

How to Watch Uruguay’s Matches in the World Cup

Fox Sports have the World Cup broadcasting rights in the United States. FOX and FS1 will split the matches to broadcast live. Moreover, the cable-cutters can watch the live stream via the Fox Sports app, fuboTV, and Sling TV.

In the UK, fans can watch the World Cup matches on TV via BBC and ITV. BBC iPlayer and ITV Hub will provide the live streaming opportunity.