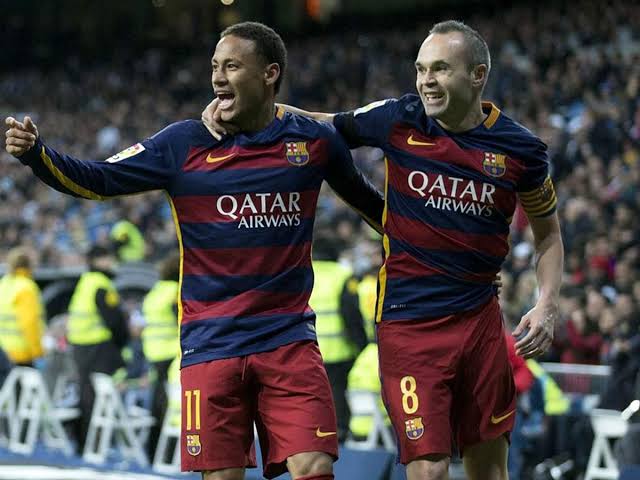 Former Barcelona midfielder and Ex Spain international Andreas Iniesta has described Neymar Jr as the best player he has shared in the dressing room. Iniesta revealed this in an interview with Onefootball.

Andreas Iniesta is a legendary figure in Barcelona and Spanish football. Iniesta played along top stars in European football in Barcelona’s golden era.

Neymar is one of the promising youngsters and the few that has gotten the compliments of Andreas Iniesta. Speaking with OneFootball, Iniesta maintained Neymar is the best player he has played with.

Neymar played alongside Andreas Iniesta and Lionel Messi at Barcelona after his arrival on the shores of Europe from Dos Santos in Brazil.

Neymar joined Barcelona in 2013 for an undisclosed fee and had reportedly signed a five-year contract with the Catalan club that will keep him in Camp Nou till 2018.

Arriving as Barcelona’s most promising youngster after great exploits with his parent club in Brazil, Neymar was always in the spotlight due to his brilliance with the ball and prospects under the Catalan giants.

After unveiling the Brazilian youngster in the front of over 56,500 fans at the Camp Nou, the then President of Barcelona, Josep Bartomeu, confirmed that Neymar was signed for €57.1m, and a release clause of €190m was slammed on his head.

Neymar made his debut for Barcelona on 30th July 2013 in Barcelona’s 2-2 draw with Lechia Gdansk in a pre-season friendly.

His first goal for the club came against Thailand IX in a 7-2 win on August 7, 2013. Neymar’s competitive debut for Barcelona came in a La Liga clash with Levante. He came on as a 63rd-minute substitute in a game that ended in a 7-0 win for Barcelona.

He scored his first competitive goal for Barcelona on 21 August 2013 in a Supercopa de Espana against Atletico Madrid at the Vicente de Calderon Stadium.

Neymar came up as a substitute for Pedro and headed home Dani Alves’ cross to ensure that Barcelona shared the spoils after Atletico Madrid had gone on the lead.

The Supercopa de Espana was Neymar’s first trophy with Barcelona. Interestingly, he contributed to the trophy by scoring to ensure that Barcelona won on the away goal rule after the score was 1-1 aggregate score.

Neymar scored his first La Liga goal on 24 September 2013 in Barcelona’s 4-1 win over Real Sociedad in Camp Nou. He also helped the Catalan record a crucial 2-1 win over Real Madrid in his first El Classico appearance.

In Barcelona’s final group game in the Champions League against Celtic on 11 December, Neymar scored his first hat-trick as the Catalans cruised to a 6-1 win over the Scottish giants

Neymar was part of Barcelona’s treble-winning season in the 2014/15 football season, in which the Catalans won the La Liga, the Copa Del Rey, and the Champions League.

He ended that season with 39 goals across all competitions and was joint top-scorer in the Champions League with Cristiano Ronaldo and Lionel Messi – all with 10 goals each.

2015/16 football season was Neymar’s penultimate season with Barcelona. He ended the season with a double and was part of the attacking trio, involving Lionel Messi and Luiz Suarez, who scored a record 122 goals in a season.

Neymar ended his final (2015/16) football season with a domestic double, winning the La Liga and the Copa Del Rey.

Neymar scored a total of 105 goals for Barcelona before leaving the club in controversial circumstances after reportedly renewing his contract the previous year.

Speaking with OneFootball, Iniesta described Neymar as one of the most talented and greatest players he has shared the dressing room with. In his words, the former Barcelona midfielder said;

“He is one of the best players I have ever seen and shared the dressing room and pitch.”

Iniesta’s opinion of Neymar is not out of place given the role Neymar played in Barcelona’s La Liga and Champions League success in his days with the club.