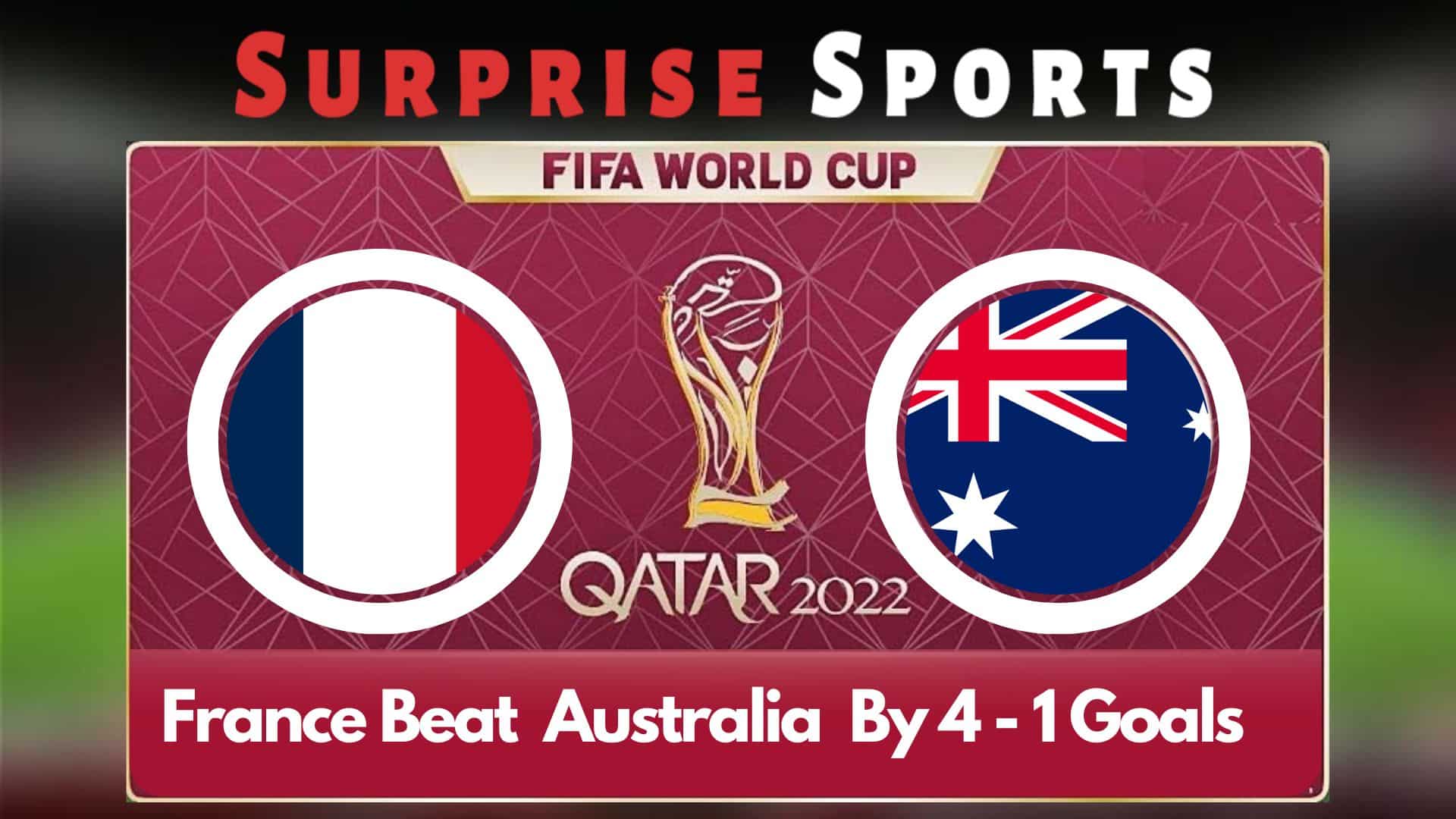 France’s first opponents are Australia, who they defeated 2-1 in their only previous World Cup encounter in 2018. As a result of Benzema’s injury, Giroud is inserted into the starting lineup in place of the Frenchman. In the first half, three-goal are scored. France hits the net twice. Australia hits the nets. Giroud scores his 50th goal and becomes the 2nd oldest footballer to score in the World Cup.

In 2nd Half Giroud and Mbappe scored. Giroud levels his goal tally with Thierry Henry with 51 goals. France dominated the game with so much attacking play.  Great start for France.

Leckie intercepts a crossfield ball from Souttar, knocking Hernandez to the ground. Goodwin arrows high into the net after the winger’s low cross. Great goal against the World Champion. Goodwin’s goal, which took just 8 minutes and 22 seconds to score, is the quickest of the 2022 World Cup.

12’ Player Injured. The referee kicks Lucas Hernandez off the field. It’s unfortunate to see that he has no further role to play here. Clearly, he’s having trouble with his knee. As a left back his brother Theo takes his place.

Adrian Rabiot the Juventus man levels the score for France. When the corner is being defended, Australia switched off in the second phase. Rabiot scores via a header off a cross from Theo Hernandez. Theo beats Ryan. France delivers quickly.  We have a very interesting game in hand.

France scores again. This time their striker Olivier Giroud scores an easy tap-in after Rabiot feds him a great ball. It’s a lovely, straightforward goal. France scored twice in as many minutes there. With Australia pressed after a goal kick, Rabiot played a one-two with Mbappe to break into the area and cross for the goal. With a beautiful backheel flick, Mbappe returned the ball.

Mbappé finds Dembele in the penalty area. The winger goes out of his way to catch the ball, but he leans back too much and kicks it away.

From the right side, Griezmann sends in a beautiful pass that Mbappe should easily control and dink into the middle. Mbappe touches it, but it goes sailing high over the goalpost.

Goal miss for Irvine! The St. Pauli midfielder gets an open header in the box and sends it back across the goal. To the left of the goal, it hits the bar before coming back into play.

Both teams had their chances, especially France who was quite fired up after the early goal they conceded.

After Goodwin gave Australia an early lead of 1-0, it was a great goal from Australia.  It appeared as though we were in for yet another unexpected turn of events but  France came into gear and scored twice in five minutes, courtesy of Rabiot and Giroud. As a result, they had a deserving lead going into the halftime break.

67’ Chance for France!  Theo Hernandez does a fantastic one-two with Mbappe and then cuts the ball back. Mbappe passes the ball to Griezmann, who has his attempt blocked. Excellent clarity! There’s still hope for Australia.

France is attacking left and right, so this goal is coming. Dembele puts in a great cross from the right and Mbappae heads the ball to the goal. This is goal number 21 of the tournament.

Goal number 51 for Giroud and he is on a hat trick. Mbappe puts in a great cross from the left and Giroud makes no mistake. He is level with great Thierry Henry.

89’ Goal save by Ryan of Australia. He denies Konate.

The first half was eventful for both teams. Australia scores early but France scores twice. Later Australia hits the post at the end of the first half. France dominated the 2nd half and left Australia speechless. They’ve created lots of chances. They scored twice in three minutes. France’s forward line looks razor-sharp.