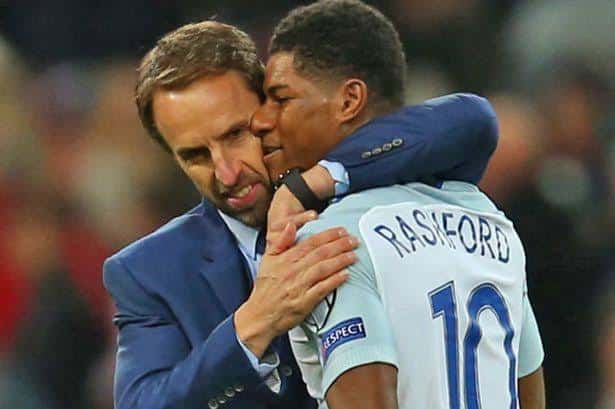 England national team coach has sent a message to Marcus Rashford after leaving out the 24-year-old Man United star from his 28-man list. Southgate, who named his 28-man list today, September 15, 2022, left out Rashford while giving the nod to Ivan Toney and Eric Dier.

Rashford built his presence into Erik Ten Hag’s new Man United squad starting ahead of the likes of Cristiano Ronaldo. Rashford scored against Liverpool and Arsenal to secure a win for Erik Ten Hag after two opening Premier League defeats.

Before Gareth Southgate named his 28-man list for the upcoming double-header against Italy and Germany in the UEFA Nations League, Erik Ten Hag had tipped the England star to be named in Gareth Southgate’s World Cup squad.

Gareth Southgate has made his 28-man list and Rashford has been left out of the squad. This has raised fears among fans that the Man United forward may not be included in England World Cup Squad.

Gareth Southgate has clearly addressed this by sending a message to the youngster after naming his 28-ma list. According to Southgate, Rashford still has a chance of making it to his World Cup squad despite being left out of the UEFA Nations League squad.

‘‘Although our results were disappointing in the summer, we have picked based on form and capability over a long period.”

Southgate further maintained that although some players have failed to make the list, that does not mean they cannot be included in the World Cup list. He particularly mentioned Rashford, who, according to him, has been on top f his game and will earn a call to the 3-Lions squad if he keeps impressing.

‘There were certain players we wanted to keep involved this time, but that said it doesn’t mean that this is the end for some of the others who aren’t involved.

‘Marcus Rashford, for example, has shown some encouraging signs recently. He is a player we know well, so if he can perform at a high level in the next few weeks, he, of course will be under consideration.’

The 3-Lions will take on Italy on September 23, 2022, in their first match, before tacking Germany on September 26, 2022, for the second match. You can watch the games live on BeinSports and other online streaming platforms.