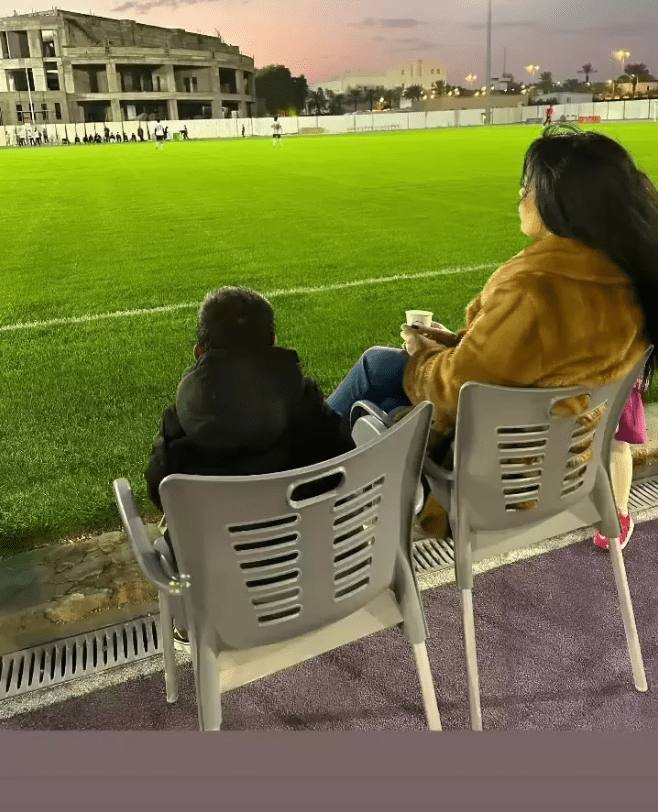 Following her lover Cristiano Ronaldo’s free transfer to Al-Nassr earlier this month, the 28-year-old social media star relocated to Saudi Arabia. Since then, the couple and their family have been residing at the Four Seasons hotel in Riyadh.

The 99-floor skyscraper’s “Kingdom Suite,” which spans two levels, is where they are currently located.

However, as Ronaldo, 37, has continued to get acquainted with his new team, Cristiano’s girlfriend has been helping him adjust to life in the Middle East.

On Saturday, Georgina shared a photo of the 12-year-old (Ronaldo Jr) playing for his new team.

Days after his father trained with the first squad, Cristiano Ronaldo Jr. returned to the Real Madrid academy.

Before departing for Manchester United, the 12 year old scored more than 50 goals in 20 games for Los Blancos’ youth teams.

Ronaldo Jr. is already a talented football player, and many media outlets have acknowledged his ability to make a name in the game.

His father has signed a £173 million-per-year contract with Al-Nassr, making him the highest-paid athlete in sports history.

He is yet to play for his first team, though.
The English FA is still making the five time Ballon d’Or winner serve a two game suspension for breaking an Everton fan’s phone at Old Trafford last April.

Thousands of supporters welcomed the 37 year old Portuguese superstar at his new Saudi Arabian club, where he was formally introduced to them.

This young family has relocated to the Middle East to begin a new life. To begin with, Saudi Arabia is one of the richest nations on earth.

There are magnificent private residences in posh areas that offer not just security for him (Ronaldo) and his family but also a comfortable and private existence. These mansions are worth millions.

He is anticipated to play in his first Al-Nassr game against Paris Saint-Germain in the coming week.

As a result, he will probably play against his longtime rival Lionel Messi, who recently made his Ligue 1 comeback after winning the World Cup with Argentina.

Ronaldo has been forced to watch from the sidelines, but he has kept up his rigorous training in anticipation of his debut.

It’s impossible to talk about Ronaldo without mentioning his propensity for scoring goals.

Cristiano Ronaldo Jr. might someday be regarded as being superior to his father in the largest sport in the world if he were to defy all odds. The young star is already leaving his mark on history so far.