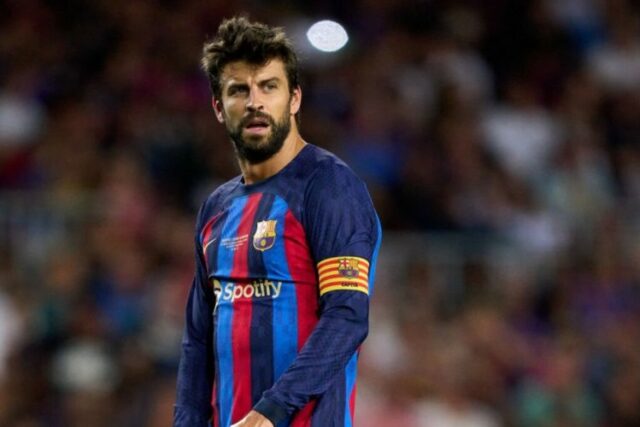 After Bayern Munich’s match in the Champions League, Barcelona defender Gerard Pique clashed with his former teammate, now Barcelona manager, Xavi Hernandez in the dressing room over his dwindling playing time at the club.

Gerard Pique was open about his unhappiness with his reduced game time at Barcelona this season. The defender had to complain after he reportedly heard that the coach said he was going to play even lesser than expected.

“Gerard Piqué was heard complaining about his playing time in the dressing room”, Barca Universal reported.

“Xavi heard it, and told him: ‘And you’re gonna play even less now’.”

Pique seems to have fallen way off the pecking order as the manager now prefers Jules Kounde, Ronald Araujo, Andrea Christensen, and Eric Garcia over the Spanish defender.

The veteran defender is now the fifth choice and is likely to leave Barcelona at the end of the season. The defender is one of the club’s highest-paid players, earning 52 million euros per year according to reports in Spain.

The club sees him as one of the players obstructing its financial capabilities to sign new players. The club is keen on terminating his contract.

The 35-year-old has two years remaining on his contract with Barca, which ends in 2024.

Catalonia’s Gerard Pique has clocked 607 appearances with 53 goals and 15 assists for the country, but he has started only one match out of eight matches played in the La Liga and that came as a substitute against Viktoria Plzen in the Champions League that ended in favour of the Spanish side by five goals to one.

Xavi does not want to give playing chances to his former teammates. For instance, Jordi Alba’s playing time has been cut short by Alejandro Balde, with the manager claiming he loves Balde’s talent.

During the transfer window, Barcelona negotiated with Inter Milan for a loan deal for Alba’s back, which the defender was not happy about and rejected the idea.

Sergio Busquets is no longer getting enough playing time with Franck Kessie and Frenkie De Jong ahead of him.

Xavi has informed the veteran players to get ready to fight for their place because it is a new season.

What is Xavi building at Barcelona and why should a veteran like Gerard Pique be left out?

Xavi has been building an impressive squad with Robert Lewandowski this season, filled with young and energetic players. Xavi also wants underperforming players to leave the club.

The Spanish giant struggled last season and with the help of a well-experienced manager, Barcelona are likely to compete for all the silverwares available this season.

The veteran players will struggle to play at the fast pace and well-comprehensive style of play imposed by Xavi. The coach wants to implement a Pep Guardiola style of management.

Pique is very influential and can be toxic in the dressing room. Xavi needs to communicate with him and make sure he gets playing time in other cup competitions.

Xavi should task the veteran players to work actively in encouraging young lads.