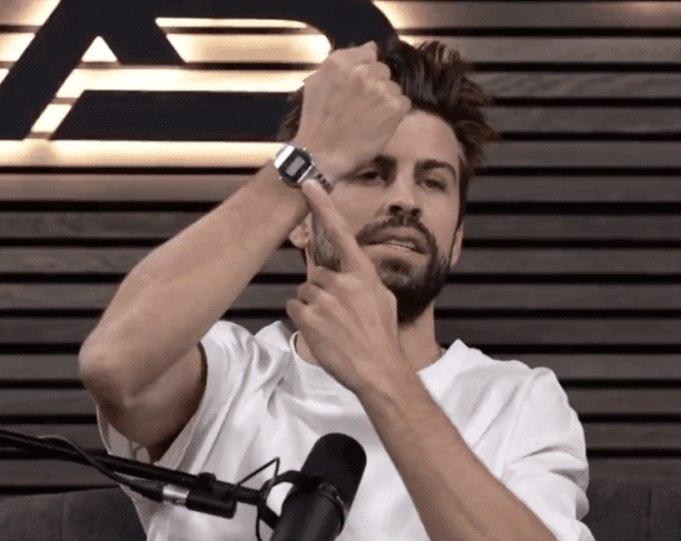 Gerard Pique laughed off Shakira’s diss song about him after revealing that his 7-a-side league had a sponsorship contract with Casio.

After 11 years of relationship, Shakira and former Barcelona and Spain defender Pique announced their separation in June 2022. Milan and Sasha are the couple’s two boys.

In the lyrics of her most recent song, the 45-year-old singer took a shot at Clara Chia Marti, Gerard Pique’s new girlfriend.

The singer made it abundantly apparent that she is referring to the 23-year-old lady who is rumored to be dating the footballer before the singer broke up with the footballer last year. A part of the lyrics stated: ‘I’m worth two 22’s. You traded a Ferrari for a Twingo. You traded a Rolex for a Casio.’

On Friday, Pique made an appearance in a King’s League stream where he responded to Shakira on his 7-a-side league, of which he is the president.

He said during the stream that “Casio has sent us wristwatches” while flashing a watch on his wrist.

‘We reached a sponsorship agreement with Casio, the King’s League struck a deal with Casio.’

As his former teammate and former Man City player Sergio Aguero was seen yelling “Casio” on the video wall behind him, those streaming with Pique couldn’t stop giggling at his insulting comment on Shakira’s diss song.

Pique said, “This watch will last a lifetime,” before fellow streamer Ibai Llanos said, “You’ve must be kidding,” as the retired defender handed out watches to everyone in the room.

When Aguero was questioned why Pique had made the news, he participated in the joke by saying that his old teammate had been “annihilated” by Shakira.

He stated that:  ‘It was because of Shakira’s song. I think that’s why Casio is sponsoring us. Pique got annihilated by that song.’

The 35-year-old, who began his career playing for Manchester United, was the target of numerous jabs in Shakira’s song.

One of the songs’ lyrics read: ‘A lot of gyms. But work your brain a little bit too.’

With the lyrics to the song, Shakira makes another obvious connection to Clara: ‘She’s got the name of a good person. Clearly is not how it sounds.’

A different line from the song reads: ‘From love to hate there’s only one step’ before Shakira adds: ‘No hard feelings baby, I wish you the best with my supposed replacement.’

Prior to the song’s global release, only a little portion of the lyrics had been leaked online, referring to a line the mother of two says in the song: ‘I’m too big for you, that’s why you’re with someone just like you,’ before continuing: ‘I’m not coming back to you, even if you’re crying or begging.’

What Happened Between Gerard Pique And Shakira?

A significant factor in Shakira’s breakup with her ex-boyfriend Gerard Pique was disclosed earlier this year.

After 11 years of marriage, the Colombian-born singer, 45, and the Barcelona and Spain defender, with whom she has two children, divorced.

On the set of her official World Cup single “Waka Waka” in 2010, Pique got to know Shakira.

According to Spanish media, the breakup between Pique, 35, and the “Hips Don’t Lie” singer was caused by Pique’s infidelity.

Shakira did appear to mention a second reason for the breakup when she finally broke her silence to address the breakup.

She stated in an interview with the magazine Elle that she had to “sacrifice” her career in order to support Pique’s and spend more time with the couple’s children, but that he had not shown the same level of commitment to her.

Shakira talked about the “darkest time” of her life and revealed some of the circumstances of the breakup, she said they were “too private to share… everything is so raw and new”.

Before her kids entered school, she claimed to have led a “nomadic existence,” frequently moving between Colombia, the US, and Spain.

Shakira claimed that she even brought her firstborn Milan to the US while she was a judge on “The Voice,” nursing him there when he was just two months old.

She continued: “I knew that when he started school I had to settle down, plant roots in Barcelona, and be there for him and for Gerard and then later on for Sasha as well.”

She continued, referring to the “sacrifice”: “Either he [Pique] would stop his contract with Barcelona and move to the US with me, where my career is, or I would have to do that instead.”

She also made the implication that she had put more “effort” into the relationship than anyone else.

“One of the two had to make that effort and that sacrifice,” she said. “So I did it. I put my career on hold and traveled to Spain to be by his side as he played football and won championships.”

She called what she did a “sacrifice of love.”