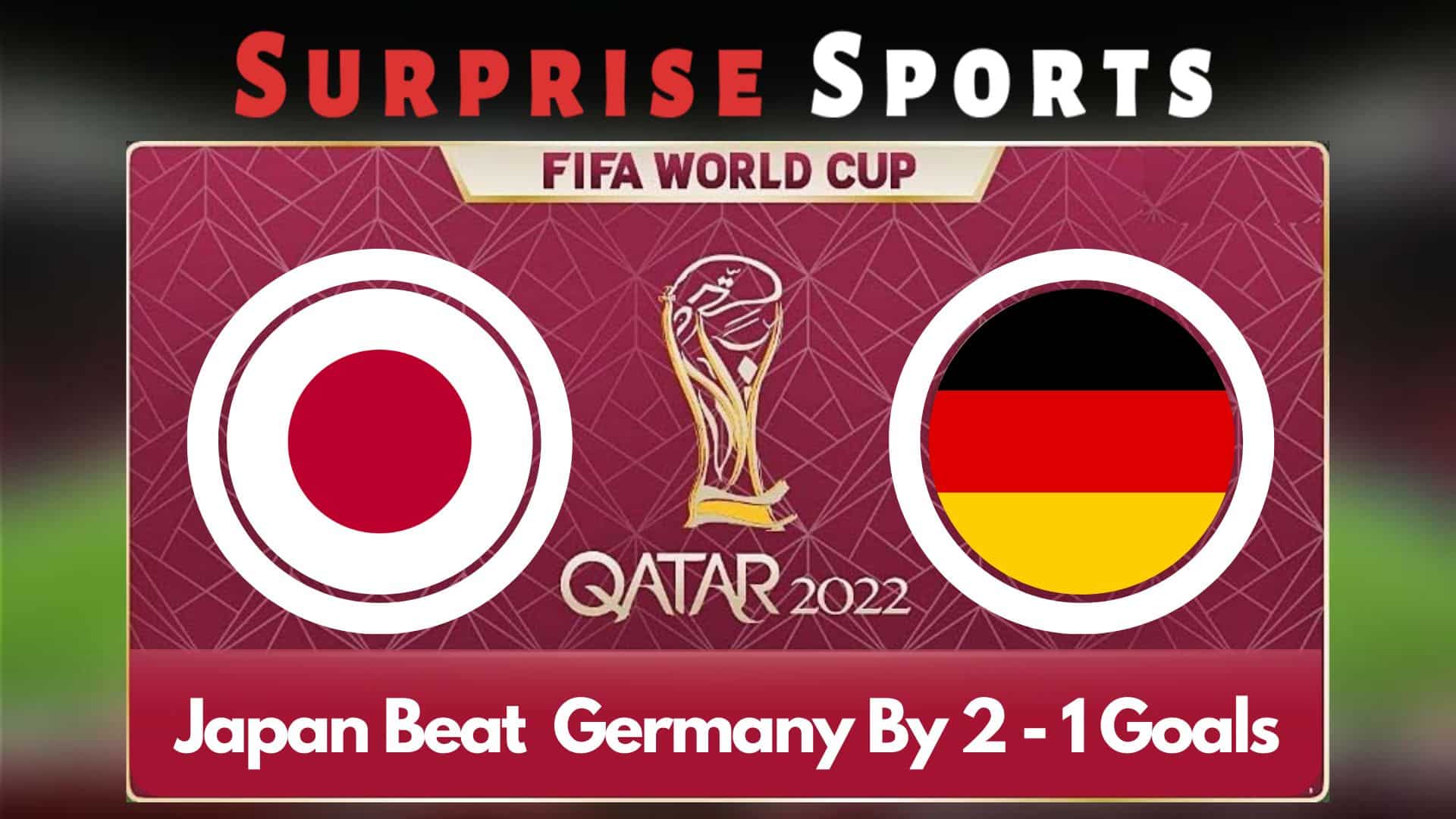 This is the first time that Germany and Japan have played each other at a World Cup. The match is played at Khalifa International Stadium (Wed, Nov 23, 2022). Germany gets a penalty and leads 1-0. In the 2nd half, Japan turns the game around in the 2nd half. They had a great 2nd half with a score of Germany 1 – 2 Japan.

Gundogan gives up possession of the ball in the middle of the field, and Japan immediately presses forward. Spread to Ito on the right wing, his perfect cross finds Maeda waiting at the far post, and he slots it home! But very quickly, the referee calls it an offside.

25′ VAR Check. A brief review by VAR checks a possible handball by Endo in the box, but there is no evidence linking the Japan midfielder to the ball after it was crossed by Havertz.

31’ Penalty to Germany. As Kimmich floats the ball over the top of Sakai and toward Raum, Sakai is caught well out of place. Gonda takes down the left back as he cuts onto his right foot, and the Japan goalie is given a penalty for his attempted tackle. The referee makes an easy decision quickly for a penalty.

Gundogan takes the penalty and gives Germany the lead. Gundogan walks up to take the penalty and puts Germany up 1-0 after beating Gonda to the ball and scoring in the left corner. Bad mistake from the Japan goalkeeper.

45+4’ Goal for Germany. Kai Havertz puts it home. VAR intervenes and checks the goalHavertz’s goal was disallowed because he was offside when he touched it in, keeping Japan from falling farther behind.

Halftime – Germany 1 – 0 Japan. Germany has an impressive start with 70% possession.

The German side coached by Flick has been the superior side in the first half, particularly ever since they scored and had a second goal scored by Havertz disallowed by the VAR just before the halftime break. Maeda’s early goal that was disallowed was Japan’s finest chance to attack the German goal, but they haven’t really been close.

60’ OFF THE POST! Germany keeps pressing as Musiala again finds himself in space. He passes it to Gundogan’s shot, and the resulting attempt hits the bar at Gonda’s left post.

73’  NEUER MAKES A GREAT SAVE!!! Ito brings down Endo’s forward ball in the area and unleashes a low shot that Neuer has to claw out of the far corner! A golden opportunity for Japan to score is missed when Sakai follows in but misses the target with his volley.

Score levels. Japan attacks quite a few in the last few minutes this they succeeded. A well-deserved goal from Japan. Mitoma makes a forward push and finds Minamino, whose cross-face shot is blocked by Neuer. Doan was the quickest to respond, and his slam into the back of the net helped the three Japan subs tie the game.

The last 25-minute spell for Japan is magical and they deserve every bit of it. Itakura takes a free kick deep in his own half, and Asano meets the long ball with a beautiful first touch to beat Schlotterbeck. He charges into the penalty area and unleashes an angled shot that sails over Neuer’s head and into the back of the net. Wow, what a comeback, what a twist, and what a dramatic ending to put Japan ahead 2-1!!!

88’ Japan Demands a penalty but is not given.

Point table of Group (E) after this match

After only eight minutes, Germany almost got a scare when Maeda tapped in, but his offside position saved the 2014 champions. Germans dominated the rest of the half, peppering the Japan goal and eventually earning a penalty in the 33rd minute after scaring them into action. The Manchester City midfielder had three excellent scoring chances before he finally converted from the penalty spot.

2nd half Japan turns things around with a good spell of 20 minutes. They hammered one home to put the score 1-1.  They scored again after a few minutes with a great ball from Ko Itakura netted by Takuma Asano. Scores 2-1. Great win for Japan. It puts Germany under pressure and Japan has a great chance to move to the 2nd round.