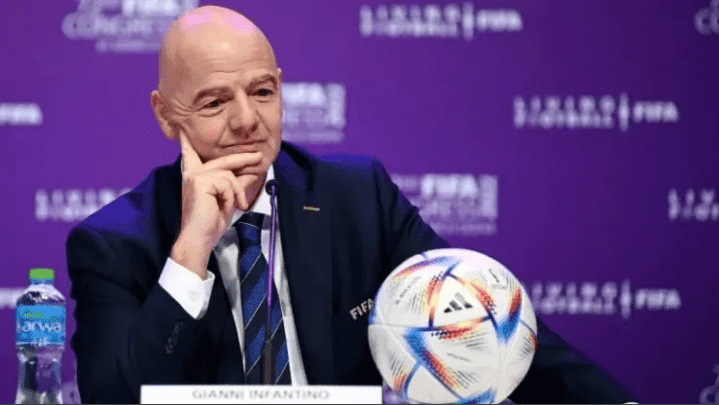 FIFA president, Gianni Infantino, who wants to bring about “genuine change,” has acknowledged that North Korea might one day host the World Cup.

Any country is eligible to host an event, according to FIFA President Gianni Infantino, who is running for re-election for the third time. Infantino also stated that his organization wants to help bring the world together.

Gianni Infantino had responded to criticism against FIFA over the decision to stage the World Cup in Qatar. He had to make a lengthy speech to defend the host before the opening of the contentious Qatar World Cup on Sunday.

The president, who was born in Switzerland, also acknowledged that he had traveled to North Korea in the past to see if the country would be interested in holding a women’s tournament with their neighbors, South Korea.

Infantino stated that FIFA is a global association for football. “We want to unite people because we are football fans, not politicians”, he said.

“An event can be held in any nation. When it comes to hosting events, North Korea too can.

“Years ago, I traveled to North Korea to inquire about their readiness to co-host a portion of the Women’s World Cup with South Korea.

“Only participation can result in genuine change. We are a worldwide organization that aspires to continue being a global organization.”

North Korea, which is now ranked 112 in the world, hasn’t participated in football’s biggest tournament since South Africa 2010, their second trip after making their debut at the 1966 edition in England.

The secretive nation is run by Kim Jong-un and has a hostile relationship with South Korea. Recently, ballistic testing has increased on the peninsula.

According to Gianni Infantino, he previously attempted to persuade North Korea to co-host the Women’s World Cup with South Korea.

While their northern neighbors have yet to host a significant competition, South Korea and Japan shared hosting duties for the 2002 edition of the competition.

Infantino’s remarks are being widely criticized ahead of the World Cup, which begins on Sunday, with many of the critics citing worker deaths and human rights abuses in Qatar.

But he has been persistent in saying that fans should concentrate on the game rather than bringing up problems outside football.

Infantino had earlier urged the 32 participating nations to concentrate on their football, but he used his news conference to defend Qatar and call for “understanding” of various religious beliefs.