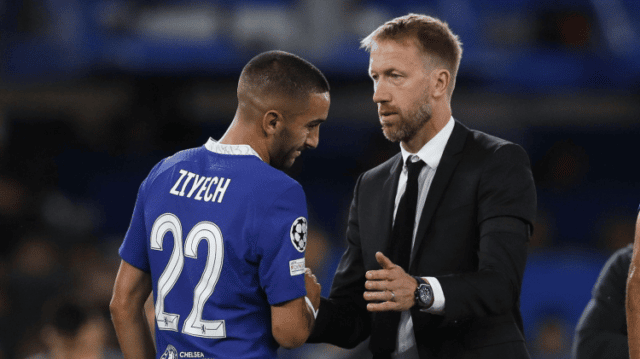 Chelsea boss Graham Potter was left upset after Red Bull Salzburg spoilt his debut match in command with a late equalizer in Wednesday’s 1-1 draw in the Champions League.

Soon after the halftime, Raheem Sterling gave the Blues the lead, but Noah Okafor scored 15 minutes from time to give Austria a point in the Champions League match at Stamford Bridge.

With just one point from their first two international matches, Chelsea is still at the bottom of Group E, but there are just three points separating them from leaders and their next opponents, AC Milan.

Wesley Fofana and Kalidou Koulibaly were dropped to the replacements’ bench in Potter’s lineup announcement, and Cesar Azpilicueta and Thiago Silva were instead started in a back four.

When Raheem Sterling gave Chelsea the lead at Stamford Bridge early in the second half, Potter was on track for a successful start.

As a result of Noah Okafor’s late equalizer, the former Brighton manager, who took over for Thomas Tuchel last week, had to settle for a point.

The fact that Chelsea’s performance was mostly lackluster highlights the job Potter must do to fix the problems Tuchel’s expensively put together team has.

Chelsea will need to win both of their remaining games against AC Milan in order to advance to the knockout stages after earning just one point from their opening two Group E games.

Due to the upcoming funeral for Queen Elizabeth II, Sunday’s Premier League match against Liverpool has been postponed. Potter won’t play again until October 1 when Chelsea visits Crystal Palace following the international break.

Potter, who was named just 24 hours after Tuchel’s shocking resignation, will at least have some time to settle in following a week that the 47-year-old characterized as “whirlwind” as he begins the biggest job of his career.

When Potter led Brighton to their greatest Premier League finish of ninth place last season, he garnered considerable acclaim for his outstanding job.

However, Brighton’s success on a shoestring provides little practice for managing a team with Chelsea’s ambition.

Prior to entering Stamford Bridge on Wednesday, Potter had never even attended a Champions League match; his only prior exposure to a continental competition was in the Europa League with Swedish minnows Ostersunds.

In honor of the occasion, he replaced Ben Chilwell, Wesley Fofana, and Kalidou Koulibaly with Marc Cucurella, a former Brighton left-back Thiago Silva, and Jorginho.

Prior to Mount’s low cross finding Sterling, who had time and space to hit the far bottom corner from 14 yards, Reece James and Mount worked together down the right.

The visitors were constantly competitive and pounced as soon as Chelsea made a defensive error, even if the home team continued to have the best of the play.

Thiago Silva’s ill-advised tackle on the left side of the field allowed Junior Adamu to provide a low cross, which Okafor then deflected beyond Kepa Arrizabalaga from 10 yards away.

Potter, who introduced attack-minded players and lined up with a back three made up of James, Silva, and Marc Cucurella, had no intention of settling for a draw.

When Armando Broja sprinted the length of the field to throw a low cross for Hakim Ziyech, the strategy nearly paid off, but goalkeeper Philipp Koln was able to make the block from a close distance.

Then, in stoppage time, Broja missed a chance to win it by volleying over the crossbar from eight yards when he should have scored, and Ziyech mistimed a more difficult opportunity into the Salzburg goalkeeper’s appreciative gloves.

How Did Graham Potter Fare In His First Game In Charge

A change in Formation

Following the lineup announcement, there was more speculating about how Chelsea will line up under Graham Potter. With the defenders at his disposal, a back three appeared to be considerably more likely than the various theories that it might be a switch to a 4-3-3 formation. What followed was the only thing that was in doubt.

To everyone’s astonishment, Raheem Sterling lined up in front of the back three on the left flank. On paper, he was a wingback, but in reality, he was wide and high, giving him plenty of attacking momentum.

Beyond that, Mason Mount, Jorginho, and Mateo Kovacic were used in a midfield three, with Pierre Emerick-Aubameyang and Kai Havertz leading the line.

Flexibility appears to be essential in defense and beyond, as Chelsea became accustomed to under Thomas Tuchel.

Potter’s statements may give Fofana and Koulibaly some hope, though it is still too early to draw too many conclusions. However, it is unclear whether anyone else could play the part Cucurella did.

There was no defending to be done by the wing-back. In any case, it wasn’t a position that many people would have anticipated Sterling to fill when he emerged as Tuchel’s top target during the summer and was seen to be the key to opening up Chelsea’s assault.

Former Blues manager used Sterling extensively in the attacking line and high up the pitch to intimidate opposing defenses. The former Man City star had scored three goals before to Potter’s arrival, despite Chelsea’s lack of attacking fluidity.

Sterling looked as dangerous as ever despite being set extremely wide against Salzburg. The winger had more room to run into because of his deeper position, but the 27-year-old still had an impact around the 18-yard box because he frequently came at the far side.

It’s tough to contest his goal from the edge of the box in the 48th minute, which involved a very slick touch before a finish that almost appeared too simple. Even with a new goal, the club still made a profit of about £50 million as he scored his 250th goal across all club competitions.