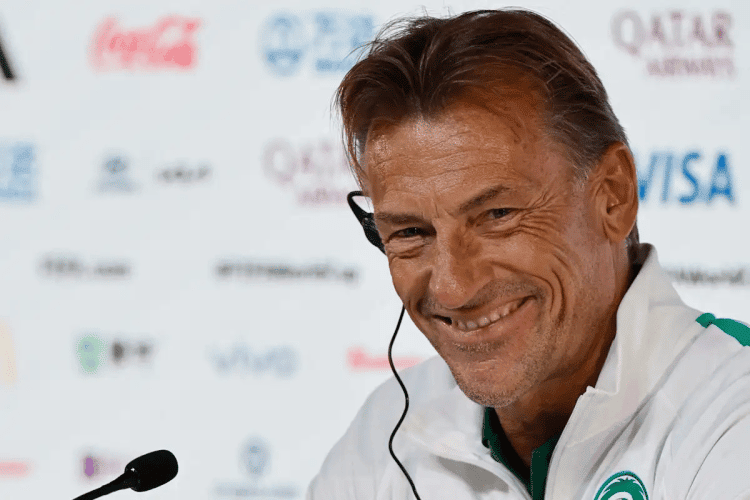 Herve Renard led Saudi Arabia to beat Argentina 2-1 in their first match of the FIFA World Cup in Qatar and people are asking questions already.

You don’t defeat the favorite to win the World Cup, Argentina, by coming from behind every day. What kind of manager is required to plan such an improbable outcome, then?

With Mexico and Poland still to play, Group C has been completely opened up after a 2-1 victory over many people’s World Cup favorites, Argentina. This might result in some of the most exciting matches at the tournament over the coming weeks.

It is tough to dispute the final score after Lionel Messi and his colleagues were defeated by two goals in a frenzied five-minute span.

Who was responsible for the defensive mastery as the Saudi Arabian team outworked, outfought, and ultimately outscored Lionel Scaloni’s team, which was on a 36-game unbeaten streak?

Who is Herve Renard?

Hervé Jean-Marie Roger Renard, a French professional football coach and former player, was born on September 30, 1968. He currently serves as the squad manager for Saudi Arabia.

Renard formerly oversaw the national squad of Zambia, with whom he won the 2012 Africa Cup of Nations; he also triumphed with the Ivory Coast in 2015, making history as the first coach to win the competition twice with distinct teams.

He worked as a cleaner at Draguignan after his professional retirement and subsequently started his own cleaning business.

Before being given the job in Zambia, Renard ran a few clubs in Europe and Asia.

Before leaving his position and taking over Angola, where he resigned after only seven months in command, he took them to the quarterfinals of the African Cup of Nations for the first time in 14 years.

He went back to Zambia in 2011 and guided the country to its first-ever AFCON victory in 2012. He was subsequently eliminated in the group stage a year later and released in October 2013 in order to take a job with the French club Sochaux.

After a brief stint with Sochaux, Renard resigned when they were demoted in April 2014, and in May of the same year, he was named manager of the Ivory Coast.

Renard won the AFCON with the Ivory Coast in 2015, making him the first manager to do so with two different countries.

Renard then took control of another African team, this time Morocco, after a dismal stint at French club Lille that ended after just 13 games.

With Morocco, he helped them qualify for the 2018 World Cup, their first appearance in the tournament since 1998. He presided over Morocco’s shocking AFCON round-of-16 defeat in 2019 before stepping down on July 15 just a few days later.

He later took charge of Saudi Arabia, leading them to the 2022 World Cup and became the foreign manager with the most victories for a country in the process (18).

He oversaw one of the greatest upsets in football history on November 22, 2022, when Saudi Arabia won just their fourth game overall and their first-ever World Cup opener against the “mighty” Argentina.

While Renard is currently enjoying the World Cup’s towering heights, his early forays into management occurred in some rather unnoticeable settings.

For 26 games, he oversaw League Two’s (Division Three at the time) Cambridge United, when the Frenchman gave John Ruddy, an experienced goalkeeper, his debut.

Even though Ruddy had played for Manchester United and Everton throughout the course of his lengthy career, he claimed that the preseason under Renard was the toughest he had ever done.

He told The Daily Mail that Renard was a good man-manager who frequently worked out in the gym himself and who helped him remain composed on his debut. He stated: “The first 15 minutes of my debut I could hardly take a goal-kick I was that nervous, but Herve was very good at making you feel like you were good enough.

“One of the biggest memories I have of Herve is the work rate not only he demanded of us but also showed himself in the gym. The pre-season under him was and still is the hardest one I have ever done.”

Renard, who also coached Jermaine Easter, was credited with being a pioneer in sports science by outlawing common meals like ketchup and mayonnaise.

How does Herve Renard line up his formation?

Saudi Arabia put on a feisty and fervent performance against Argentina.

The Saudis not only generated opportunities, but also prevented Argentina from scoring more goals, thanks to a high line and pressure on Messi.

Messi and Lautaro Martinez were repeatedly caught offside due to their defensive discipline, which resulted in three goals being disallowed in the first half alone.

A modest alteration from their qualifying system, Saudi Arabia stood up against Argentina in a 4-3-3, allowing them to be more daring in their attempts to win the ball back.

The widow of coach Bruno Metsu, Viviane Dièye, and Renard are romantically involved.