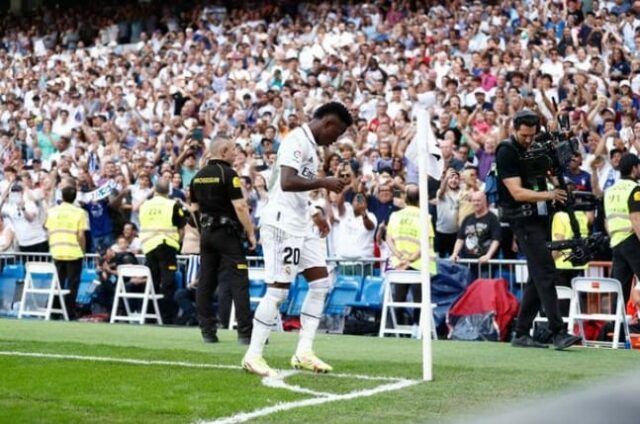 In the last few days, Vinicius has had to fight racial taunts he received on Spanish television because of the way he celebrates goals.

Amid the attack against him, Vinicius has pledged to continue to dance whenever he scores goals since dancing represents “the happiness of a black Brazilian in Europe.”

Agent Pedro Bravo called the gifted 22-year-old a monkey during a discussion about the Brazil international on El Chiringuito, adding that “in Spain, you have to respect rivals and stop playing the monkey.”

Vinicius, who has scored five goals so far this season, has since gained backing from all corners of football. Neymar, his Brazilian teammate, tweeted: “Dribble, dance, and be yourself!”

While Colombian striker who currently plays for Rayo Vallecano, Radamel Falcao, said: “The way you are makes you happy. Go for it my boy, let’s dance to the next goal.”

“I’m not going to quit dancing. Whether at the Bernabeu, the Sambadrome, or anywhere else”, Vinicius said via an Instagram post.

Vinicius Jr. was instructed to “stop playing the monkey” by a major agency in Spain, and now he finds himself embroiled in a vicious racism storm.

Support for the Champions League winner has poured in from all over the world, especially from fellow countrymen, and Gabriel Jesus made sure to stand up for his Selecao teammate when he scored in a Premier League match against Brentford by dancing after scoring.

Jesus used a well-known platform in the world of football to help drive a message home to those who still need to hear it. He had already expressed his support for Vinicius on social media before the game.

Also, Dani Alves defended his fellow countryman Vinicius Junior after the latter faced racist taunts because of his dancing celebrations.

Related
Aggregate Score in Soccer: Definition, How It Works & When It's Used

Indeed, Alves is just one of several players that defended Vinicius after Bravo’s comments.

In the same vein, American rapper diddy has shown his support for the young Brazilian talent as he backed him to ignore his critics and continue to focus on his good form.

Diddy wrote on Instagram: “@Vinijr I see you King! Fuck racism and the ignorant oppressors all over the world. We’ll let God handle them!!! Dont ever let anybody steal your magic! The magic that you perform on the field or the magic that you have as a Black man when you celebrate! Keep dancing and keep winning! We love you and we support you!”