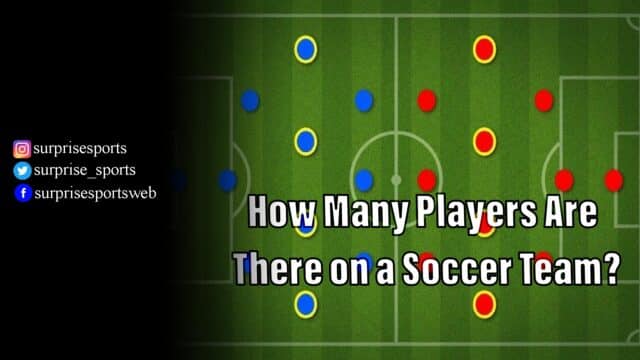 It can sometimes be puzzling to figure out how many soccer players each team has during a match. Things may get even more confusing with all the substitute players and the different limits per age group. Luckily, I’ve done my homework, and this is what I found.

There are 11 players on a soccer team at one time in a match (1 goalkeeper; 10 outfield players) with 7 players on the bench to substitute them; 22 players total on the field between the two teams (plus 1 referee and 2 assistant referees). Youth soccer teams under 12 have fewer players on the pitch.

How Many Players Are There on a Soccer Team?

There are 11 players on a soccer team in a match at one time, including the goalkeeper and excluding substitutes.

Eleven is the maximum number of players per soccer team. (Only in age groups below 12 years old, the number is lower.)

If any team has fewer than seven players, the referee cannot start the match or allow it to continue.

That said, a soccer team may have less than 11 players if:

That is what I.F.A.B. (International Football Association Board — the organization that creates and manages the rules of the game of soccer worldwide) says in Law 3 – The Players of its rule book.

Composition of a Soccer Team

These eleven players are composed of one goalkeeper and ten outfield players.

The outfield players have different positions (defense, midfield, or attack) and roles on paper.

In practice, however, they play wherever the coach or the game asks them to. Even the goalkeeper is free to go and try to score a goal, take a penalty, or a free kick.

How Many Players on a Soccer Team, Including Substitutes

The number of players on the bench in soccer may differ among leagues, cups, tournaments, and across different countries.

Notwithstanding, there are seven substitute players in most domestic and international competitions.

That means there are 18 players on a soccer team, including substitutes.

How Many Players on a Soccer Field?

Since two soccer teams face each other and 11 players per team, that totals 22 players on the field on game day.

Number of Referees in a Soccer Match

There are one main referee and two assistant referees on the pitch, plus the fourth referee (or official) out of the playing ground, standing between the teams’ benches.