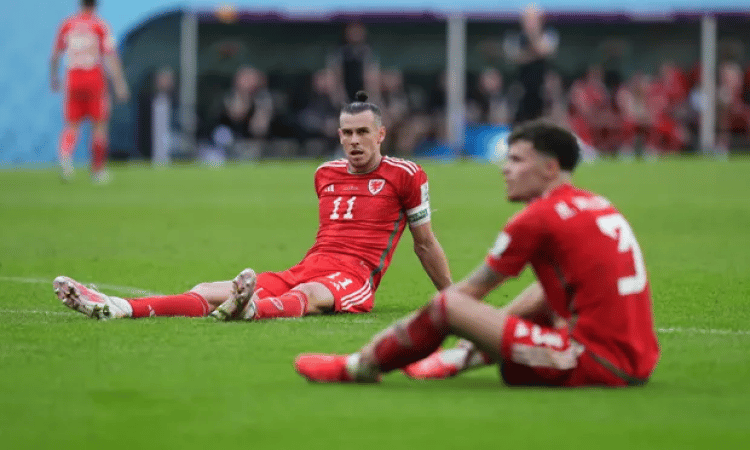 Iran surprisingly outplayed and won Gareth Bale’s Wales in their Group B encounter in the on-going FIFA World Cup in Qatar.

Before the match kicked-off a rainbow was sited on the pitch amid the controversies surrounding the LGBT+ in the World Cup.

At the final horn, Iran’s players fall to the ground in celebration. The stadium crowd was obviously impacted by what they just seen as Carlos Quieroz congratulated his players after the thrilling encounter. What an outstanding performance.

Wales had a terrible day and will now need to defeat England in order to move on to the knockout rounds.

Wales is in ruins, whereas Iran is ecstatic to the point of madness. Joe Allen failed to effectively clear a low cross from the left, which raced to substitute Cheshmi 25 yards from the goal.

He went after the loose ball, half-controlled it on the stretch, and then fired an incredible curving shot in the direction of the goal. When diving, Wales goalkeeper, Danny Ward, later noticed the ball while fully extended, it lightly touched his hands, unfortunately the ball settled in.

On Monday, there was observed silence at Khalifa International Stadium, ostensibly in sympathy of the anti-government demonstrations in Iran.

However, on Friday, loud jeers from Iranian supporters could be heard as the players sang the national anthem contrary to how they started their game against England on Monday.

Iran has recently experienced widespread protests, which have been greeted with a harsh repression.

The series of protests were brought on by Mahsa Amini’s death while held in September. Mahsa was 22 years old and had been arrested by morality police for allegedly flouting the severe regulations regarding head coverings.

During the game between Wales and Iran, a woman in the audience wearing dark red eye makeup was crying while holding a football shirt with the words “Mahsa Amini – 22” written on it.

Human rights advocates claim that during an Iranian security force crackdown, at least 400 protesters were killed and 16,800 more were detained.

The protests, according to Iran’s government, are “riots” planned by the nation’s adversaries outside.

Iran striker Mehdi Taremi stated before the game on Friday that the team was “not under any pressure” following their decision to skip the national anthem against England.

At the press conference, Taremi’s seatmate, Portugal-born Iran manager Carlos Queiroz, said: “It’s your right to do those questions, but what what I feel strange, as a normal citizen of the world, is you don’t ask the same kind of questions to the other coaches and other national teams, knowing that they have so many problems at home, and cause so many problems all over the world.”

After drawing with the United States, Wales’ players had referred to this match as a “must-win game,” but Wales finished second-best throughout and lost goalkeeper Wayne Hennessey to a red card in the last minutes.

Wales must now defeat England in their last group match on Tuesday in order to advance to the round of 16, something they haven’t done since 1984.

After losing to Iran 2-0, Wales’ chances of moving on to the World Cup’s knockout rounds were dangling by a thread.

At the Ahmad Bin Ali Stadium in Doha, substitute Rouzbeh Cheshmi and Rezaeian Ramin scored goals in stoppage time to give Iran its third World Cup win overall, a victory they well deserved.

Congratulations to Iran and take-heart to Wales, but Group B is still out for grabs.