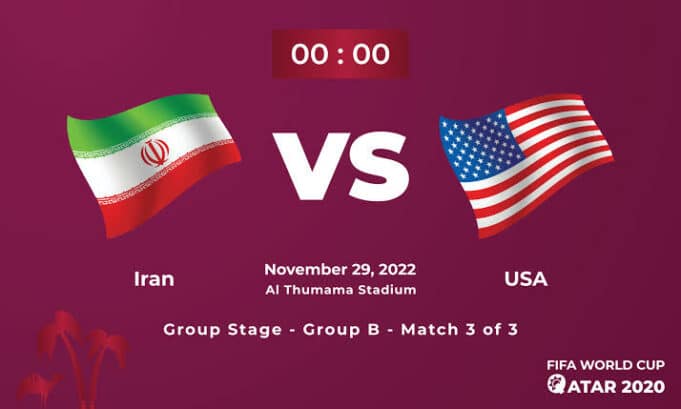 Iran has called on FIFA to ban the US from the World Cup for omitting the Islamic emblem from their national flag.

The US football governing body, the US soccer federation, omitted the Islamic emblem in Iran’s national flag while putting the USA Vs Iran fixture up on social media.

The US soccer federation is said to have deliberately omitted the Islamic emblem in the flag as a sign of solidarity with protesters in Iran ahead of the two nations’ World Cup match Tuesday.

Iran will take on the US in their final group game, in what most is deemed a crunch tie, given the historical enmity and faceoff that has soiled diplomatic relations between the two countries.

The game is also a make-or-mar game for both sides, with Iran leading the USA by a point after a shock win over Wales in the second game.

The USA have drawn their two World Cup group matches against Wales and England and is third in the group behind England and Iran.

They must win the game if they want to qualify for the next level of the completion. It is indeed a crunch tie.

Meanwhile, tensions have already began to boil between the two countries, with a day to go in the game.

This follows the controversial removal of the Islamic emblem from the Iranian flag by the US soccer federation – a move that has angered the Iranian government.

According to reports, Iran claimed the Americans have removed the name of God from their national flag and have asked FIFA to immediately kick the USA out of the World Cup with a 10-game ban from soccer.

The symbol was later returned to the flag on the USA’s website, but the move by the US Soccer Federation has further stoked tensions in the Middle East’s first World Cup – tournament organizers have hoped will be insulated from broader controversies and concerns.

The US Soccer Federation said in a statement Sunday that it decided to forego the official flag on social media accounts to show ‘our support for the women in Iran with our graphic for 24 hours.’

The Twitter account of the U.S. men’s team displayed a banner with the squad’s matches in the group stage, with the Iranian flag only bearing its green, white and red colors. The same could be seen in a post on its Facebook and Instagram accounts laying out the point totals so far in its group.

The US Soccer Federation displayed the official Iranian flag in a graphic showing Group B standings on its website.

The two sides have played once before at a World Cup – in the 1998 tournament held in France – in a game dubbed by English soccer magazine FourFourTwo as ‘the most politically charged game in World Cup history.’

The protests have seen at least 450 people killed since they started, as well as over 18,000 arrested, according to Human Rights Activists in Iran, an advocacy group following the demonstrations.

There have equally been calls by Iranians to boycott the World Cup, with others calling for Iran to be kicked out of the competition.

The Iranian government have reportedly clampdown on the protests blaming foreign political actors in the global political space, including the US, for unrest.

Iran’s mission to the United Nations and its soccer federation did not immediately respond to a request for comment following the said comments.