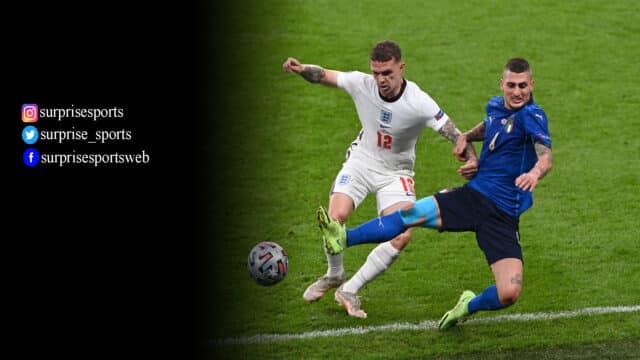 England will take on Italy on Friday in Milan as the Nations League returns. After a couple of disappointing results in June, Gareth Southgate’s men will be keen to come back in winning ways in their penultimate match before the World Cup. Here we have Italy vs England, start time, prediction, team news, and lineups.

After a few disappointing outings in June, Gareth Southgate’s men will be keen to come back in winning ways.

There’s little time remaining for Gareth Southgate to pull things together as the World Cup looms in November. Fans would expect good performances against Italy and Germany before flying to Qatar.

On top of that, the Three Lions are at the bottom of Group A3 in the Nations League. It’s a feat they need to change in the remaining two games for not being demoted to League B.

On the other hand, the Azzurri have been unbeaten at home against England since 1961. Roberto Mancini’s men, shockingly, couldn’t make it to the World Cup. Their sole concern will be the Nations League.

Italy lost 5-2 to Germany in their last match. Before that, they drew 1-1 with Germany at home, beat Hungary 2-1, and shared the spoils with England 0-0 in Molineux.

As the World Cup 2022 is on the horizon, it’s unlikely Southgate will tweak his squad too much.

Kalvin Phillips will miss out due to injury. Declan Rice and Jude Bellingham would play side-by-side in midfield. John Stones is suspended.

Nick Pope would start as the goalkeeper as Pickford is injured. Harry Maguire could start despite lack of game time at Man Utd.

Marco Verratti will sit out this one due to a calf injury. It’s a huge setback for Italy. Matteo Politano and Lorenzo Pellegrini have also pulled out, with Manolo Gabbiadini joining instead.

Lazio’s Ivan Provedel, Guglielmo Vicario (Empoli), and Pasquale Mazzocchi (Salernitana) are available to pick and could make their debuts.

Italy and England went head-to-head in June in Molineux for a 0-0 draw. The two sides met in the Euro 2020 (held in 2021) final at Wembley, with Italy being the European Champions on penalties.

England will try to grab a victory and fly to Qatar with momentum. However, it wouldn’t be easy in Italy, where they have been winless since 1961. The Three Lions will be on all cylinders to make things right.

There’s no World Cup in November for Italy. Their sole concern will be the Nations League. However, Roberto Mancini will miss key players in the midfield. It would be difficult for the Azzurri to control the midfield.

We predict England will bounce back with a narrow victory. Italy 0-1 England.

7 Best Defensive Midfielders in the World