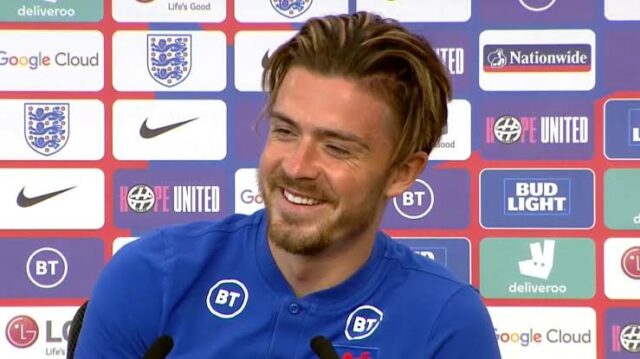 Manchester City attacking midfielder Jack Grealish has opened up on his struggles at the club, his relationship with Pep Guardiola, criticisms from English media, and his place in Gareth Southgate’s England squad. The 27-year-old joined Manchester City from Aston Villa as one of the most expensive midfielders in the Premier League last year.

After a victorious debut season with Manchester City winning the Community Shield and the Premier League title as his first major titles in his football career, it appears the table has turned for the English star this season.

Jack Grealish has seen his game time under Pep Guardiola reduced drastically in the 2022/23 football season. He has made just 3 appearances for Manchester City out of 10 competitive matches played this season.

After Manchester City brought in Julian Alvarez and Erling Haaland, the English star has seen his game time slashed with criticisms from English media about his form both for the Citizens and the 3-Lions of England.

Amidst the criticisms and the drop in form, Jack Grealish has weighed into the details surrounding his recent form and lack of game time. He has also spoken about his relationship with Pep Guardiola, the pressure from the media, his place in the 3-Lions squad, Gareth Southgate, and his determination to up his game.

Grealish scored his first goal for Manchester City in a 3-0 win. Despite his lack of game time at Manchester City, Gareth Southgate has included him in the 28-man squad for the UEFA Nation League clash against Italy and Germany.

Speaking at England’s press conference ahead of the UEFA Nations League game, Grealish addressed a myriad of issues hovering around his career that has hit a downturn in recent months.

Addressing his Manchester City form and relationship with Pep Guardiola, Grealish admitted struggling in Pep Guardiola’s squad and the glimpses of improvement.

“I probably haven’t been playing at the top of my game since I’ve moved to City, but I think I’ve shown glimpses of it, and over the next two months especially, I’m just going to try to get my head down as much as I can, work so hard and hopefully good things will happen”, he said.

He attributed his downbeat performance to the slight changes at Manchester City compared to his former team Aston Villa. Grealish admitted a more regimented and less-free structure at Pep Guardiola’s Manchester City and how he had struggled to adapt to it.

“At City, there’s more structure”, he said. “I have a great relationship with the manager. I’ve said in so many interviews I have never seen anything like it in the way he thinks and the way he looks at football.

“He’s just obsessed with it, and you can tell why and see why. I know people might be saying I might be playing a bit different from the way I used to, but I think that comes with the players I am playing with as well.”

“I was captain at Villa and one of the first names on the team sheet”, he said. “When you come to City – and this is no disrespect to Villa – you have players like Kevin [De Bruyne], Phil [Foden], I could go on and on.

“We’ve even got a full-back at the moment in Joao Cancelo who I reckon is one of the best wingers in the world. It’s obviously different and it’s difficult at times.

“I am playing with so many top players, it was obviously going to change my game a bit. I’m never going to be the exact same player that I was because I am playing for a different club, a different team and a different manager. Hopefully, This is the start of my season and I can just kick on from here.”

Grealish scored his first goal for Manchester City in a 3-0 win over Wolves to douse the waves of criticism on his form a little. After the game, Kevin De Bruyne lashed on the English media for always criticizing their own players unfairly. He suggested that his teammate, Jack Grealish is being unfairly targeted by English media because he is an English international.

When De Bruyne’s comment was directed to Grealish, he replied, “I will ask you, do you?”

The reporter said he agreed and Grealish laughed saying, ” I don’t know, but I want to be friends with you all.”

Grealish went on to agree with De Bruyne’s viewpoint that he has been unfairly targeted by the media due to the £100m transfer fee Manchester City paid for his services.

“I can obviously see where he’s coming from a little bit. But I think that’s just the way it is in this country, especially if you’re myself, playing for one of the biggest clubs in the world, who are winning trophies every single year”, he said.

“And obviously when I have the price tag on my head that I have, people are going to want to talk. It’s just something that I need to (get on with).

“I keep going back to it, saying embrace it and it’s just part and parcel, really. But, yeah, I do see where he’s coming from a little bit.”

Grealish On Criticisms Of Gareth Southgate

Gareth Southgate came under intense criticism after England’s four-match slump in the UEFA Nations League with a 4-0 defeat to a lowly-rated Hungary prompting England fans to call for the sack of Southgate.

Grealish maintained that it was unfair to criticize the England manager and call for his dismissal. He pointed to the strides of the former England defender with the Three-Lions of England, which include taking the team to the 2018 World Cup semi-finals, and reaching the 2020 Euro finals; only losing on penalties to Italy.

Grealish added that the call to sack Southgate was harsh and asymptomatic of the tendency to criticize English nationals when they slightly fall below the pecking order. “He had experienced it as an English”, Grealish said. “I think it was harsh.

“We reached the final last year and then the Hungary game (we lost 1-0) at the start of the last camp, I think before that the last time we’d lost a game over 90 minutes was maybe Belgium in November 2020 or something.

“So, I think it is very harsh, especially (as you saw at) the World Cup and the Euros of how well the team done and the manager himself.

“I thought it was obviously harsh but sometimes that’s what you get if you’re English. I’ve certainly had my fair share!”

Grealish added that whether he will be used as a substitute or in the starting IX, he will be at his best for the 3-Lions and also up his game at Manchester City.