Jadon Sancho is an English professional footballer who plays as a winger for Manchester United in the English Premier League and the England national team. The 22-year-old’s net worth is more than $25 million. Here we highlight Jadon Sancho’s net worth, salary, earnings, contract, stats, career, girlfriend, and detailed information.

Jadon Malik Sancho was born on 25 March 2000, in Camberwell, London, England, to parents from Trinidad and Tobago. Sancho made his senior debut for German club Borussia Dortmund and made a big-money move to Manchester United in 2021. He represents the England national team at the international level.

Jadon Sancho played youth football for Watford and Manchester City. The winger made his senior debut for Borussia Dortmund and played for the German club between 2017-2020.

The promising and creative winger became a regular in his second season. He helped Dortmund to win the DFL-Supercup in 2019 by defeating Bayern Munich. He also won the 2020-21 DFB-Pokal as the tournament’s top scorer. Sancho was named to the Bundesliga Team of the Season in both the 2018-19 and 2019-20 seasons.

Jadon Sancho also finished runner-up in both the Golden Boy and Kopa Trophy awards in 2019.

In July 2021, Jadon Sancho joined Manchester United. The English club spent a rumored £76.5 million transfer fee to bring in the young winger. Sancho signed a lucrative 4-year contract, with an option for a further year.

Jadon Sancho represents England at the international level. He was a part of the team that won the U17 FIFA World Cup in 2017.

Sancho earned his senior international debut for England in 2018. He played for his nation in the 2020 UEFA Euro and came as a substitute in the Final against Italy. They lost to Italy on penalties, and Jadon Sancho, Marcus Rashford, and Bukayo Saka missed their penalties. They were racially abused by the fans.

Manchester United winger Jadon Sancho’s net worth is more than $25 million as of 2023. The 22-year-old’s prime sources of earnings are his football contracts, endorsements, and sponsorship deals.

In July 2021, Jadon Sancho joined Manchester United and signed a lucrative four-year deal, with an option for a further year. His contract will expire at the end of the 2025-26 season, on 30 June 2026. Sancho will earn an £18.20 million salary per season.

Man United star Jadon Sancho is a Nike-endorsed player. He will wear the Nike Zoom Mercurial Superfly 9 soccer cleats for the 2022-23 season.

Man United winger Jadon Sancho is reportedly single. He hasn’t revealed about a relationship yet. However, the Red Devils baller is caught chilling with a mysterious lady on a yacht. 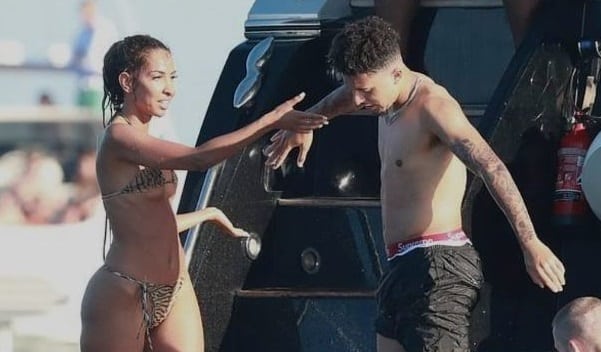 He wears no. 25 or Manchester United.

How much is his weekly salary at Manchester United?