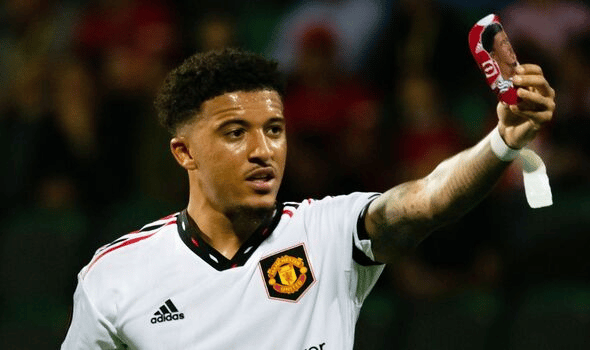 Jadon Sancho of Manchester United has promised to keep up his hard work despite not being selected for Gareth Southgate’s England team.

Sancho was not included in Southgate’s 28-man squad, while his United teammate Marcus Rashford was left out due to injury, for the Three Lions’ forthcoming matches against Italy and Germany.

Despite once again passing over Sancho, Harry Maguire, Luke Shaw, and loanee Dean Henderson all made the team. Even though they have just made two starts for United this season, Shaw and Maguire maintained their slot in England’s team.

Thursday night’s Europa League match between United and FC Sheriff saw Sancho respond admirably to his sadness at not being selected for the England team by scoring the game’s first goal with a superb and well-placed finish in the 16th minute.

After United defeated Sheriff in which he scored his third goal of the season, Sancho was questioned about his England rejection.

“Yeah, 100% [make England squad], that is one of the targets,” Sancho admitted to MUTV. “Unfortunately, I didn’t get the call-up, but I have to just keep focussing on myself and keep on working hard, week in and week out, that’s what I’ll do.”

Sancho only managed to score five goals in his debut season, but he’s nearly set to top that total this time around.

Jadon Malik Sancho, an English professional football player for Manchester United of the Premier League and the England squad, was born on March 25, 2000. He plays as a winger.

He is well known for his cunning, game intelligence, pace, and use of feints in one-on-one scenarios. He is widely regarded as one of the best young players in the world.

Sancho has previously played for Watford and Manchester City as a young player before he committed to Borussia Dortmund in 2017.

Related
What is a Nutmeg in Soccer?

He established himself as a first-team regular in his second season and was selected for the 2018–19 Bundesliga Team of the Season. After beating Bayern Munich in the DFL-Supercup, Sancho won his first title ahead of the 2019–20 season.

He was named to the 40-man shortlist for the 2020 Golden Boy after finishing in second place for the 2019 Kopa Trophy.

Sancho came back to England in 2021 to join Manchester United.

Sancho made his senior squad debut in 2018. He was a member of the England young team that won the FIFA U-17 World Cup in 2017.

After facing severe disappointment earlier in his spell at United, Jadon Sancho stood out in Thursday’s 2-0 Europa League victory over Sheriff for Manchester United.

Sancho, who was devastated over his non-inclusion in Gareth Southgate’s most recent England team, put on a show to suggest the manager might want to reconsider before the game. Sancho hopes Southgate will take something positive away from the performance in Transnistria, at least.

After 17 minutes, the forward gave Manchester United the lead with a beautifully executed shot as Erik ten Hag’s team easily earned their first points in the Europa League this campaign.

The 28-man list of players that were called up for the English squad was announced on Thursday, and they all hoped to board the flight to Qatar in only two months.

Sancho, who has made 23 appearances for the English national football team, last took the field in a 5-0 Nations League group-stage victory over Andorra in October 2021.

What did Southgate say?

“There were certain players we wanted to keep involved this time,” Southgate said in reaction to his squad for the Italy and Germany games.

“But that said it doesn’t mean that this is the end for some of the others who aren’t involved.”

The tournament is being held in Qatar, and Group B has been assigned to England. On November 21, England will play Iran, followed by games against the United States and Wales.