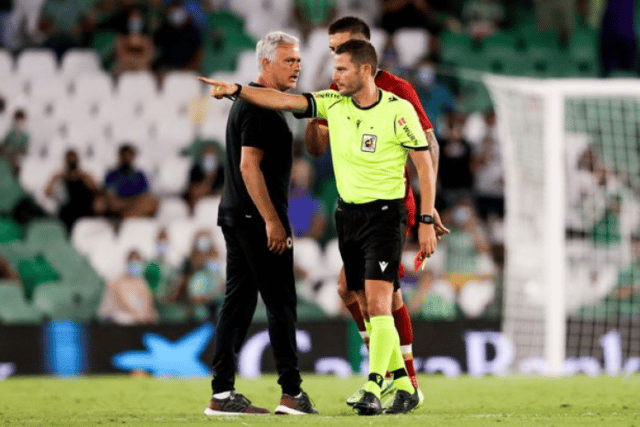 Jose Mourinho, the manager of Roma, was sent off during his team’s Serie A match against Atalanta after he raced into the pitch.

The altercation happened in the 56th minute after the Roma players’ request for a penalty was denied by the referee.

Caleb Okoli of Atalanta pulled Nicolo Zaniolo to the ground, according to Mourinho and his team.

Mourinho was undoubtedly pushed over the edge when the on-field referee and the VAR officials disagreed that the challenge called for a penalty kick.

The incensed Portuguese raced onto the field to yell at the officials and threw his arms in the air as he vented his anger at the referee.

To be fair, replays appeared to support the decision to deny Roma a penalty.

After Giorgio Scalvini gave the visitors the lead after 35 minutes, Roma was chasing the game at that point.

Roma are trying to continue their Europa Conference League success from last year, but they have had a difficult 22/23 Serie A season thus far. With four wins, one tie, and two losses through their first seven games, Roma are presently sixth in the Serie A rankings.

In Europe, Ludogorets Razgrad upset them in their initial Europa League game, but they recovered on Thursday with a convincing 3-0 victory over HJK Helsinki.

Mourinho wanted changes from his team despite the victory. He told reporters: “We were too passive in the first half.

“We were playing in eleven over ten but you could not tell the difference.”

Mourinho continued, “We adjusted our mindset in the second half, and it worked beautifully. We pushed ourselves to get one or two goals right early, and after that we just kept attacking. pressing hard and keeping an aggressive attitude.”

Mourinho stormed onto the field and erupted in wrath, clearly not pleased at all.

Security had to restrain him from screaming at the referee. After receiving a red card, he was compelled to move to the stands.

Mourinho will no longer be permitted to accompany his team on their October 1 trip to San Siro. As a result of the red card, Mourinho won’t be in charge of his team when Roma faces his former team, Inter Milan after the international break.

Throughout his time at Roma, Mourinho received several red cards. In February, he was dismissed against Verona and given a two-game suspension for gesturing at the referee.

The 59-year-old also received a red card in a 2021 exhibition game against Real Betis. Throughout his career, which has carried him from Portugal to Italy, England, and Spain, his reputation as a hothead has followed him.

Atalanta maintained their lead and earned all three points while Roma was unable to produce an equalizer.

Atalanta has risen to the top of the Serie A standings and has not lost in any of their first seven games of the season.

Roma are now ranked seventh in the league, four points behind the table toppers Napoli.

After acquiring Paulo Dybala on a free transfer from Juventus, Roma fans are expecting much more from their squad this season.

Will Mourinho’s tenure at Roma be a success this season? Only time can tell at this point of the campaign.