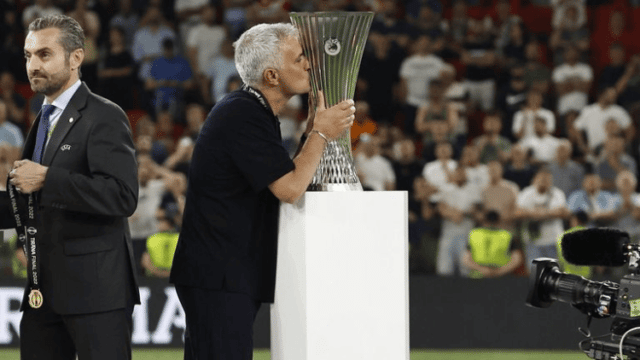 Jose Mourinho joined an exclusive group of managers who have won five or more European titles as A.S. Roma defeated Feyenoord 1-0 in the final of the inaugural UEFA Europa Conference League.

Some football coaches have trophy cases that are significantly more elaborate than others.

The Champions League/European Cup, Europa League/UEFA Cup, Europa Conference League, Super Cup, Cup Winners’ Cup, Intertoto Cup, and Intercontinental Cup are among the UEFA competitions. The latter three are no longer in operation, although they still contribute to each manager’s total.

The Champions League is regarded as the pinnacle of European competition by players, coaches, and clubs. Every year, these clubs fight for the trophy, and the competition offers some of the most prestige and money in club football.

The majority of players and managers typically view winning this competition as the peak of club-level success in Europe. When managers guide their teams to victory in a competition, they gain a lot of respect among football players.

The ultimate objective for many managers is to win the Champions League. However, several managers have been successful in taking home many championships, some even with different teams.

Here are the top six managers in terms of UEFA club titles won:

With FC Porto, Mourinho won the UEFA Cup and Champions League in 2003 and 2004, the Europa League with Manchester United in 2017, and the Europa Conference League with Roma last season. This means that Jose Mourinho is the first manager in the 21st century to win five UEFA club titles.

Jose Mourinho, also referred to as the “Special One,” is without a doubt one of the finest managers of the twenty-first century. Only two managers in history have won the UEFA Champions League more frequently than the Portuguese manager, who has done so twice in his career.

Unquestionably, Mourinho is one of the era’s most captivating managers. In his professional career, he has never lost in a European final and has won all three European events.

One of the greatest football managers of the twenty-first century is Carlo Ancelotti. The Italian manager, who also won the competition twice as a player, has won four Champions League championships in his managerial career.

In the 2002–03 campaign, Ancelotti’s AC Milan team won the Champions League after defeating Juventus on penalties. During the 2006–07 campaign, he captured his second championship as AC Milan overcame Liverpool 2-1.

Unai Emery holds the record for the most UEFA Europa League victories. He has won the title Four times, once with Villarreal CF and three times with Sevilla FC. In 2013–14, 2014–15, and 2015–16, Emery led Sevilla to three consecutive UEL victories by defeating Benfica, Dnipro, and Liverpool, respectively.

With Villareal CF, the Spaniard won the title for the fourth time by defeating Manchester United in the championship game. Penalties were used to determine the match. The final, which featured the longest shootout in competition history, was won by Emery’s team 12-11.

Zidane, who took over Real Madrid Castilla, Real Madrid’s B team, in 2014, is the youngest manager on this list.

The following year, he took over as Los Blancos’ manager and led the talented group to three straight UCL victories, including two Super Cup victories, from 2015–2018. Since 2021, he hasn’t led a group of players.

The manager of Atletico Madrid is now regarded as one of the best in the world. For the past ten years, Diego Simeone has been the manager of the Madrid giants and has received numerous awards. Two UEFA Europa League titles with the Spanish club are one of his many accomplishments.

In 2011–12 and 2017–18, Simeone’s team captured the UEFA Europa League title. The Argentine has eight championships to his name overall with the team.

The competition has also been won twice by Juande Ramos and Luis Molowny, with Sevilla and Real Madrid, respectively.

Due to his success with each team, he has managed, many people consider Pep Guardiola to be the greatest manager of his generation. In his managerial career, the Spanish manager has won the Champions League twice, both times with FC Barcelona.

In his first season as Barcelona’s manager, Guardiola led his team to their first-ever treble, which included a 2-0 victory over Manchester United. The former Barcelona midfielder holds the record for being the youngest coach to win the title to date.

Two years later, during the 2010–11 season, he captured his second championship by outlasting the same foe 3–1. With two goals, Lionel Messi was the highlight of both victories.

Despite managing Bayern Munich and Manchester City, Guardiola has tried to add to his two championships from the previous 11 years but has been unsuccessful. He came the closest during the 2020–21 season, but his team finally lost to Chelsea, who won the championship by a score of 1-0.