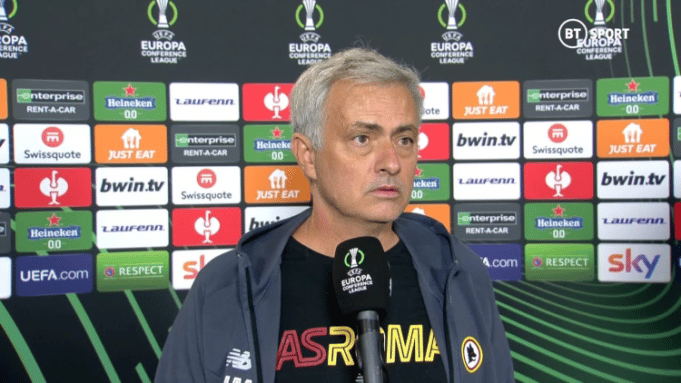 Jose Mourinho, a former Chelsea manager, seemed to criticize the team for spending £87 million to sign Mykhailo Mudryk on Sunday.

After sensationally hijacking Arsenal’s move for the attacker, the Blues introduced Mudryk during their 1-0 victory over Crystal Palace.

Mudryk made his ambition to play for the Gunners known to the world, even posting pictures of himself watching their matches on Instagram throughout the holiday season.

The Premier League’s top team was reluctant to pay Shakhtar Donetsk’s demand for £87 million up front. As soon as Chelsea decided to make a move, Mudryk signed a seven-and-a-half-year contract with them.

With 11 goals in 19 appearances, the 22-year-old made a name for himself as one of Shakhtar’s top performers this season.

Due to the players that left the team because of the ongoing conflict between Ukraine and Russia, Mudryk rose up the ranks quite swiftly. The pressure didn’t cause him to falter.

Chelsea now holds the tenth spot in the Premier League after their first league victory of the season against Palace.

Mourinho even brought up Mudryk’s transfer after Roma defeated Fiorentina 2-0. When asked about prospective January acquisitions for his team, “The Special One” acknowledged that any incoming players were improbable.

According to La Gazzetta dello Sport, Mourinho admitted, “I am not expecting anyone to arrive.”

“The director (Tiago Pinto) was very honest and direct, he said things in an interview that a coach usually doesn’t like to hear. Coaches always want to hear we have lots of money, can buy option a, b, c, d, build an incredible team. That is the dream.”

“I worked at clubs with those sorts of practically limitless funds. There are more and more clubs nowadays who fit that profile, but it’s not our profile.”

“We work, we give our all, we work with the characteristics we’ve got.”

When asked what he would do if his team suffered injuries, Mourinho responded: “We need to find a solution, we can’t just buy Mudryk for €100 million (£87 million)!”

In terms of points, Roma are now tied with Atalanta and Lazio for seventh place in Serie A, three points behind Inter Milan in fourth.

Jose Mourinho, who was once called “The Special One” by the British media, is regarded as one of the best managers of all time and is among the most awarded managers in history.

After a lackluster playing career in the Portuguese leagues, Mourinho transitioned into coaching. He originally worked as an interpreter for Sir Bobby Robson at Sporting CP and Porto before finding success as Robson’s and Louis van Gaal’s assistant at Barcelona.

Jose Mourinho returned to Porto as manager in 2002, winning the Primeira Liga twice, a Taça de Portugal, the UEFA Cup, and the UEFA Champions League, Porto’s first European Cup victory since 1987. Mourinho had previously made an impression during brief stints at Benfica and Unio de Leiria.

In 2004, he moved to England with Chelsea thanks to his achievements. Mourinho’s early management career was characterized by his conceit, and he is known for saying, “I think I’m a special one,” which has become a catchphrase for him.

He spent three seasons with the club, winning two Premier League championships, an FA Cup, and two League Cups before leaving in 2007 amid rumors that he had differences with club owner Roman Abramovich.

Mourinho returned to Chelsea after leaving Real Madrid in 2013, where he won the League Cup and yet another league championship before being fired in 2015 due to a string of disappointing outcomes.

He was hired at Manchester United and Tottenham Hotspur, respectively, while still in England, although his tenures there were both brief and ended bitterly.

As Chelsea completed the signing of the Ukrainian on Sunday, making him the second most expensive signing, Mykhaylo Mudryk bid hello to his new home and fans.

Few teams in sports history can boast spending as much money as Chelsea has over the past 20 years.

The billions invested on the playing staff were largely responsible for the club’s rise to prominence in European football after Roman Abramovich, a Russian billionaire, bought it in 2003.

In the summer of 2022, Todd Boehly, who succeeded Abramovich, continued the extravagant expenditures by wasting around $250 million.

The Top 10 Most Expensive Signings For Chelsea Are Listed Below: