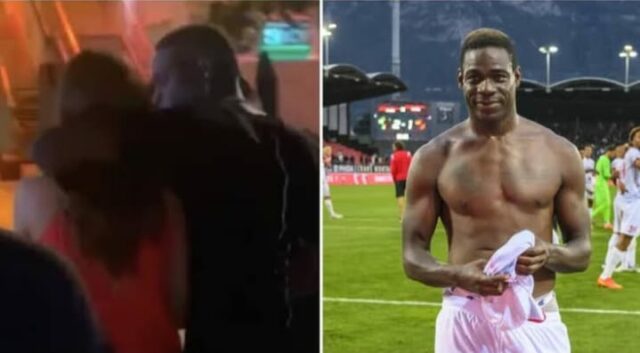 Following concerns that Mario Balotelli had vanished after a video of him stumbling out of a bar with an unknown woman appeared, FC Sion has confirmed that Balotelli has bronchitis.

This summer, Mario Balotelli became a member of FC Sion, his 11th team as a journeyman.

Only a few days had passed after the 32-year-old Italian forward quit Adana Demirspor after an altercation with manager Vincenzo Montella.

After his clash with coach Montella, Balotelli asked for his release from the club and departed right away to join FC Sion for £2.3 million.

He has only played twice for them, has not scored, and is now embroiled in more controversies.

Over the weekend, a video showed Balotelli appearing to stumble out of a Lausanne bar with his arms wrapped around a strange female. A picture of the footballer and the red-clad woman surfaced online to spark speculations that Balotelli has not outgrown his old lifestyle.

The controversial Italian striker chose to transfer allegiances to Swiss team FC Sion, signing a two-year contract in the process, following a brief but productive time in Turkey with Adana Demirspor.

Balotelli has so far played in two matches as a substitute for his new team against FC Basel and FC St. Gallen without scoring in either of the games.

The former Manchester City striker’s career in Switzerland appears to have already started to decline.

Balotelli has not shown up to training this week after being spotted leaving a bar intoxicated last weekend, according to Swiss news outlet Nau Sport.

The athlete was seen on camera in Lausanne looking a little worse for wear, to the point that he needed assistance from others as he proceeded into a parking lot.

Balotelli hasn’t been up to any FC Sion training sessions since, and the fact that the club hasn’t communicated about the situation raised the possibility of a minor problem occurring behind the scenes.

Balotelli has been active on Instagram since the video of him leaving the bar intoxicated went viral. Recently, he shared a video of his residence on his Instagram story.

On Thursday, he even posted a tale from his official account on the social media network in which he appeared to be unwinding in a very opulent setting.

Perhaps there is more to the story, but it would seem odd if FC Sion opted to excuse Balotelli from practice, especially given that the team’s Swiss Cup match against Rapperswil is on Saturday.

Will Balotelli be playing in the team? It remains to be seen, but considering the circumstances, we’d be very shocked if manager Paolo Tramezzani chose to select him.

There is potential for the Italian striker to be a success at the Stade Tourbillon, so Sion supporters will be praying that his most recent incident of controversy doesn’t have a significant impact on his career in Switzerland.

Note that Balotelli struggled somewhat at Brescia and Monza in his own country before regaining his scoring touch at Adana Demirspor.

In 35 games with the Turkish team, “Super Mario” scored 19 goals and provided assists on another seven, which is an excellent performance.

On the final day of the transfer window, the Italian striker signed a contract with the Swiss team, becoming a member of his 11th club.