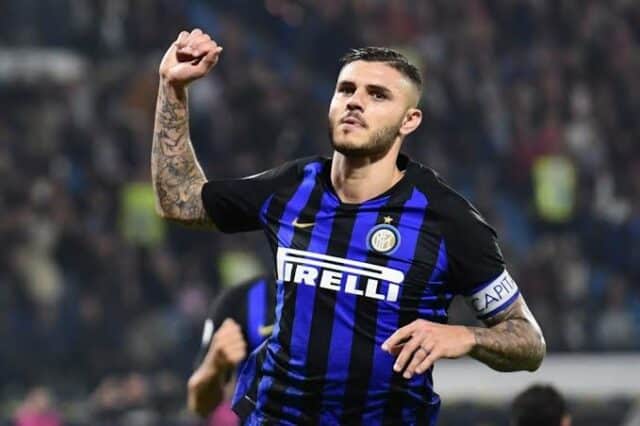 Mauro Icardi Rivero, born on the 19th of February 1993, is an Argentine professional footballer who currently plays as a striker for a Turkish club, Galatasaray.

The 29-year-old Icardi began his football career at the youth team of Vecindario and passed through La Masia, the youth system of La Liga club Barcelona, before joining Serie A club Sampdoria to begin his professional career in 2012.

His impressive performance at Sampdoria made Inter Milan bid for him and he joined Inter in July 2013, where he came into the limelight and evolved into one of the most prolific strikers in Europe.

Icardi, famous for his speed, tactics, intelligence, vitality, and impressive football technique won the Capocannoniere in both the 2014/15 and 2017/18 seasons and was named the captain of Inter Milan in 2015, at age 22.

Icardi signed for PSG on an initial one-year loan deal in 2019, before he then joined the club permanently in a €50 million deal.
The 29-year-old continued his impressive form with PSG after registering his debut for the French giants in a 1–0 win against Strasbourg on 14 September 2019.

Icardi won his first club trophy, as PSG was crowned Ligue 1 champions after the season had been called off amid the COVID-19 pandemic in 2020.

He also won the Coupe de France and Coupe de la Ligue before he remained an unused player as he tested positive for covid-19 and also had injury issues.

By the end of last season, Icardi had only scored five goals in all competitions, being his lowest tally in a campaign since his debut season at Sampdoria.

Mauro Icardi departed from PSG and signed a one-year loan contract with Süper Lig team Galatasaray on the 8th of September, 2022.

Despite Icardi’s football prowess, he made his senior debut for Argentina in October 2013 but since then, he has played sparingly for the Argentine national team.

Mauro Icardi was controversially left out of the Argentina’s final squad for the 2018 FIFA World Cup. This has been often accredited to his marriage to Wanda Nara, whose ex-husband is Icardi’s former Sampdoria teammate Maxi López.

Icardi had been dating Lopez’s ex-wife Wanda Nara since 2013. At that moment, Wanda was married to Maxi López and the duo had three children together.

Hence, Lopez and Wanda got divorced after her relationship with Icardi was exposed in 2013.

Shortly after Wanda’s divorce from Lopez was finalized, she and Icardi thereafter got married on the 27th of May 2014, at a small ceremony in Buenos Aires.

Wanda Nara left Maxi Lopez and formed a new family with Icardi with the pair having 2 girls; Francesca and Isabella.

Meanwhile, the marriage to Wanda ignited animosity and bitterness against Icardi in Argentina.

He was subjected to mockery and was hated by his countrymen and some of Argentina’s national team players who considered that he had broken gentlemen’s codes.

Mauro Icardi’s generalized hatred has been an important factor why he was not selected to participate in the 2018 World Cup.

It was reported that among prominent figures that condemned Icardi’s marriage was the late Diego Maradona who was involved in bitter exchanges with Icardi on Twitter.

In a press conference ahead of a “Match for Peace” in 2016, an event that was organised by the Vatican, Maradona was asked whether Icardi should be called for Copa America that summer, Maradona said: “I don’t know if Icardi will be called up for the national team. I don’t speak about traitors. I’m here for the Match for Peace & Icardi has nothing to do with it.”

Similarly, during a Serie A match between Sampdoria and Inter in April 2014, López notably refused to shake hands with Icardi, leading the press to tag the game as “Wanda derby”.

Two years after the “Wanda derby”, López repeated the same action by again refusing to shake Icardi’s hand during a Serie A match against Torino.

Icardi released his autobiography called Sempre Avanti (Always Forward) on the 11th of October 2016. The book aroused controversy as Icardi described an occurrence that enraged Inter Milan’s fans, leading to a banner being raised calling for Icardi’s exit from Inter.

The former PSG player described a horrible moment he had with inter fans after his shirt was thrown back to him and insults hurled at him after scoring a goal.

He was fined for his unruly reaction stating in the book that he will bring criminals from his home country to “kill them on the spot”.

He wrote: “After saying that, I threw the shirt in his face. At that moment, everything kicked off like the world was ending.”

“I’m ready to face them one by one. Maybe they don’t know that I grew up in one of the South American neighborhoods with the highest rates of crime and people killed in the street,” Icardi affirmed.

“How many of them are there? Fifty? A hundred? Two hundred? Okay, record my message and let them hear it. I will bring 100 criminals from Argentina who will kill them on the spot.”

Afterward, Icardi was fined by the club and was forced to remove the content from the book.

Meanwhile, Icardi’s marriage with Wanda almost came to a dramatic end in October 2021 when Wanda confirmed she had signed divorce papers after accusing Icardi of cheating. However, the two rekindled their relationship before the month ended.

Recently, Wanda Nara was spotted acting as Icardi’s representative, making a list of demands for him before the 29-year-old joined Galatasaray on the 8th of September, 2022.

It remains uncertain whether or not Icardi will be listed among the Argentina players for the 2022 FIFA World Cup.

Among the 28 listed players that will represent Argentina in the friendlies against Honduras and Jamaica later this month, Mauro Icardi is not among which could mean that Argentina manager, Lionel Scaloni does not have a plan for him.

Although the 2022 FIFA World Cup squad is expected to be named in October, it does not seem manager Lionel Scaloni would reignite Icardi’s international career using the forthcoming World Cup in Qatar.